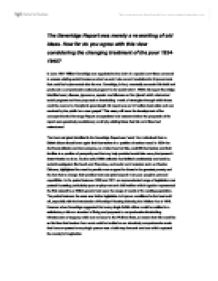 The Beveridge Report was merely a re-working of old ideas. How far do you agree with this view considering the changing treatment of the poor 1834-1948?

The Beveridge Report was merely a re-working of old ideas. How far do you agree with this view considering the changing treatment of the poor 1834-1948? In June 1941 William Beveridge was appointed to the chair of a special committee convened to assess existing social insurance schemes and make recommendations for improvements that could be implemented after the war. Beveridge, in fact, eventually exceeded his brief and produced a comprehensive national programme for social reform. Within his report Beveridge identified want, disease, ignorance, squalor and idleness as five 'giants' which obstructed social progress and then proposed an interlocking matrix of strategies through which these could be overcome. Despite its great length his report was an immediate best seller and was received by the public 'as a new gospel.' This essay will trace the development of the concepts that the Beverage Report encapsulated and assess whether the proposals of his report were genuinely revolutionary or simply existing ideas that his committee had restructured. The foremost giant identified in the Beveridge Report was 'want'. He maintained that no British citizen should ever again find themselves in a position of serious need. In 1834 the dominant attitude was that everyone, no matter how humble, could lift themselves and their families to a position of prosperity and that any help provided would take away that person's determination to do so. By the early 1900s attitudes had shifted considerably and work by social investigators like Booth and Rowntree, and social commentators such as Charles Dickens, highlighted the need to provide more support ...read more.

The grant was extended in 1839 and the government began gradually to involve itself in this aspect of everyday life. The genuine need for a more educated working class became relevant to politicians following the 1867 Reform Bill and as Britain's industrial supremacy became threatened by apparently better educated foreign workers. Such issues stimulated the introduction of the 1870 Forster's Education Act which effectively provided access to primary education throughout the country. In 1902 the possibility for free secondary education was introduced, and by 1918 the official national school leaving age had been raised to fourteen. The recommendations of Beverage's report were implemented in1944 through Butler's Education Act. All education was for the first time to be available free of charge and the school leaving age was raised to fifteen with a planned extension to sixteen a few years later. It was proposed that compulsory part time education should also be introduced up to the age of eighteen as soon as practical. This aspect of the Beveridge report seemed little more than the next step of a natural progression in the development of British education. Indeed the raising of the school leaving age to fifteen had been proposed as early as 1926 in the Haddow Report and many children were already being provided with free education. Beveridge was also determined to confront what he termed 'squalor'. This effectively meant substandard living conditions. In the 1830s rapid urbanisation created a 'squalor' crisis in most major cities. ...read more.

The idea itself was no longer revolutionary; the only new aspect was that it was to be applied to everybody. The Beverage Report provided the direct inspiration for the establishment of the Welfare State and can is generally looked upon as the source of the greatest initiative by any British government to meet the needs of the working people and the poor. Nevertheless a previous attempt to tackle similar issues had occurred under a Liberal government between 1906 and 1914 and there are many similarities between the ideas expressed on both occasions. This is not surprising since Beverage was also a key figure in the implementation of the earlier reforms. The provision of state subsidised insurance against sickness, old age and unemployment was not a new concept in 1942, some provision of free child welfare and medical support was already available and state subsidised quality housing was relatively common. The idea of financing reform through higher taxation of the rich had even been introduced in the 'People's Budget' of 1909. To this extent Beverage was reworking existing ideas in his report. What appeared quite revolutionary in 1942 was the concept that all people, rich or poor were equally entitled to state support and that this support should be universally available. He proposed a 'Welfare State' that would protect all citizens from the 'cradle to the grave'. What also appeared completely new was the actual underlying philosophy behind the report which The Times, in July 1948 commented treated the individual 'as a citizen, not as 'pauper', an object of charity'. ...read more.