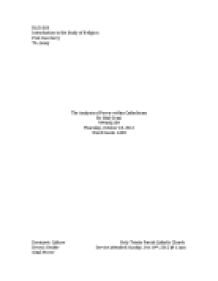 The Catholic Church analyzed. The reoccurring presence of statues and gold within Holy Trinity Parish serve to prove that power within Catholicism is predominantly in the hands of male religious authorities

﻿RLG101H Introduction to the Study of Religion Prof. Ken Derry TA: Jenny The Analysis of Power within Catholicism By Gital Gosai 999682259 Thursday, October 18, 2012 Word Count: 1498 Davinjeet: Culture Holy Trinity Parish Catholic Church Dewni: Gender Service attended: Sunday, Oct 14th, 2012 @ 11am Gital: Power Michel Foucault, one of the most influential thinkers of the second half of the twentieth century makes the claim that ?Knowledge is Power? (Nye 2008, 74). In this essay I look at the use of statues as well as the placement of certain religious authorities and the presence of gold in the ?Holy Trinity Parish?. Drawing on the views of both Michel Foucault and Karl Marx I argue that, within this community, power is exerted by the higher religious male authorities onto the followers of this religion thus giving these authorities a higher stature within the community. I use Michel Foucault?s ideas of the panopticon, and of knowledge and power, as well as the Marxist ideas of the interrelation between economics and religion and class division to analyze the patterns that I viewed during the Catholic service. A reoccurring theme that stood out to me during my visit to the ?Holy Trinity Parish? was the presence of statues. ...read more.

This knowledge gives him power over everyone else; he stands on an elevated surface, and is the only one speaking during the majority of the service. The second most evident pattern I saw within the church was the presence of gold, whether it be in color or actual material form. The gold could be seen in virtually every statue of Jesus Christ, in the paten and chalice (as described by the nun), in the plates surrounding the pews, the candleholders, and in decorative pieces here and there around the church whose names I am not quite familiar with. The gold was also present in the clothes of the pastor, and in the jewelry of the nuns. Every cross that the nuns were wearing was made of gold, as was the cross that the Pastor held up during a part of the service. The pastor himself was wearing a green garment with gold crosses on it. It looked as though the massive statue of Jesus Christ, located central in the church, was made entirely of gold as well. In fact, every statue of Jesus had some sort of gold present in it. ...read more.

The majority of the service was in English, but I feel like I could have made more thorough observations had he stuck to speaking in English for the entire service. Another limitation is the fact that I didn?t ask the nun (whom we spoke to briefly about the service) as many questions regarding the most important patterns I saw during the service as I should have. Had I questioned her more thoroughly about my second pattern, I think I would have been able to conduct better arguments. The reoccurring presence of statues and gold within ?Holy Trinity Parish? serve to prove that power within Catholicism is predominantly in the hands of male religious authorities. If, according to Foucault, ?Power is Knowledge? and vice versa it is easy to see that the Pastor and Jesus Christ who both seem to have the most knowledge have the most power. This argument is further proven with Marxist ideas that Power comes with material value, as the Pastor and Jesus Christ ? who, the sister we spoke to says, is the key religious figure in Catholicism- are both associated with Golden materials, whether it be on their clothes or their statues. ...read more.