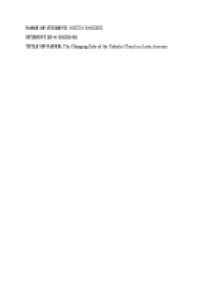 The Changing Role of the Catholic Church in Latin America

Liberation theology is a political movement within the Catholic Church that seeks to promote social justice by addressing poverty and underdevelopment of the poor. Liberation theology as well as, to a great extent, the Medellin and Puebla Conferences, represent the recognition of the failure of the orthodox Catholic Church in dealing with the social issues of the poor.[11] Liberation theology was significantly founded on Marxist insights as it highlighted the class structure in Latin America that was perpetuated by the State and the institution of the Church. Instead of focusing on religious doctrine that emphasized success and rewards in the afterlife, it emphasized instead the need to achieve success and development in the present life. Therefore, it advocated preparing the poor with the necessary skills to bring them out of poverty. In an effort to pursue its objectives, Christian Based Communities were set up in rural areas in order to train peasants with skills considered helpful in their economic advancement.[12] However, this new movement created some friction within the Catholic Church itself as reflected by its rejection of the Marxist claim of class struggle by the Congregation of the Doctrine of the Faith. Consequently, liberation theology reflected a transformation and a new radical branch in the Catholic Church. It is illustrative of the degree to which the changing socio-economic landscape impacts the nature of institutions. The growing concern for poverty creates an ideological fracture within the traditional institution of the Church that prioritizes human and social justice. ...read more.