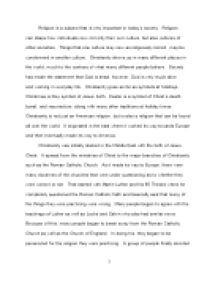 The Christian Cultural Heritage of the USA. Thomas Jefferson and the Creation of America.

﻿Religion is a subject that is very important in today?s society. Religion can shape how individuals view not only their own culture, but also cultures of other societies. Things that one culture may view as religiously correct, may be condemned in another culture. Christianity shows up in many different places in the world, much to the contrary of what many different people believe. Society has made the statement that God is dead; however, God is very much alive and working in everyday life. Christianity goes as far as symbols at holidays. Christmas is they symbol of Jesus? birth. Easter is a symbol of Christ?s death, burial, and resurrection, along with many other traditions at holiday times. Christianity is not just an American religion, but is also a religion that can be found all over the world. It originated in the east where it worked its way towards Europe and then eventually made its way to America. Christianity was initially started in the Middle East with the birth of Jesus Christ. It spread from the ministries of Christ to the major branches of Christianity such as the Roman Catholic Church. As it made its way to Europe, there were many doctrines of the churches that were under questioning as to whether they were correct or not. That started with Martin Luther and his 95 Theses where he completely questioned the Roman Catholic faith and basically said that many of the things they were practicing were wrong. ...read more.

Jefferson believed in what the Unitarians of the early nineteenth century believed. The big idea in this belief was that God was only one person. He was not represented as God in three persons (555). Even though Jefferson may have had a somewhat different view on religion than other of his time, he still had good intentions with everything he did. One of the notable things he did was his reasoning behind free public education and his three tier education chart. He wanted all individuals to be able to grow up and have equal opportunities for everything in life. When they went out into the real world he wanted everyone to be just as well educated as everyone else. He believed that people, no matter what race they were, what sex they were, or what type of family they came from, that they all had an equal chance. Schmidt says that ?although Jefferson was essentially a Deist, he was nevertheless greatly influenced by Christian values? (254). Throughout Thomas Jefferson?s life, he had a numerous amount of accomplishments and achievements. One thing he did was reform Virginia by writing the first draft of the Declaration of Independence. In Douglas T. Miller?s book Thomas Jefferson and the Creation of America, chapter three, titled Reforming Virginia, discussed the many accomplishments of Jefferson. Some of his major goals towards creating a more republican utopia included ?devising easier access to land ownership; establishing religious freedom; providing free public education; streamlining and liberalizing Virginia?s penal code; and ending the slave trade and eventually abolishing slavery? (Miller 26). ...read more.

Not only is there that amendment, but there are also the amendments of cruel and unusual punishment, the abolition of slavery, woman?s suffrage, black suffrage, rights to a fair trial, and many other ones that all have a Christian background. All of these amendments were put into play to look out for us as individuals. They all give3 each person an equal chance at whatever. The women?s and black?s suffrage state that there should be no discrimination against race or sex on the matter of voting. What it says about slavery is that no person should have to be put under involuntary service to another person accept as a punishment. And on the matter of punishment, there shall be no cruel and unusual punishment, meaning that no one should be punished for more than what their crime was. In 2 Corinthians 8:13, the Bible says that ?I do not mean that others should be eased and you burdened, but there as a matter of [equality].? God did not intend for people to be treated differently. He created man equally in His image and intended on everyone to be treated as equals as well. The few amendments mentioned and many others all show this idea of equality in humans. Even though many people claim that the United States was not started based on Christianity, it still has Christian ideas and backgrounds. Not only are Christian ideas shown in the Constitution but also in currency. On every dollar bill the words ?In God We Trust? are written on them. Christianity had a huge impact on government whether people want to believe it or not. ...read more.