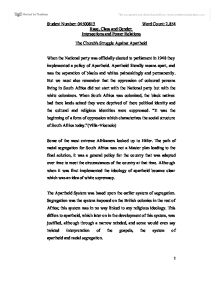 The Church's Struggle Against Apartheid

The Church's Struggle Against Apartheid When the National party was officially elected to parliament in 1948 they implemented a policy of Apartheid. Apartheid literally means apart, and was the separation of blacks and whites painstakingly and permanently. But we must also remember that the oppression of coloured persons living in South Africa did not start with the National party but with the white colonizers. When South Africa was colonized, the black natives had there lands seized they were deprived of there political identity and the cultural and religious identities were suppressed. "It was the beginning of a form of oppression which characterizes the social structure of South Africa today."(Villa-Vicencio) Some of the most extreme Afrikaners looked up to Hitler. The path of racial segregation for South Africa was not a Master plan leading to the final solution, it was a general policy for the country that was adapted over time to meet the circumstances of the country at that time. Although when it was first implemented the ideology of apartheid became clear which was an idea of white supremacy. The Apartheid System was based upon the earlier system of segregation. Segregation was the system imposed on the British colonies in the rest of Africa; this system was in no way linked to any religious ideology. This differs to apartheid, which later on in the development of this system, was justified, although through a narrow minded, and some would even say twisted interpretation of the gospels, the system of apartheid and racial segregation. Of significance was the way the policies were enforced. The Native affairs department of the earlier segregationist period was more passive than its successor, The Bantu Affairs Department. ...read more.

As a result, the Methodist Church gained a large membership during the apartheid era in South Africa. The Methodist church was one of the first churches to actively speak out against apartheid in a time where most of the English speaking churches that seemed to disagree with the government tried to keep politics and religion separate. The first example of this can be seen in 1948 when the newly elected National party proposed a law that would take the native Africans already limited political representation away, all of the English speaking churches reacted differently but only the Methodist church spoke out directly to stop this legislation becoming law, the Methodist church stated "No person of any race should be deprived of their constitutional rights... merely on the grounds of there race." In 1957, there was the first real united opposition by the English speaking churches, when The National Party proposed a law which made it almost impossible for any native African to worship in any white area which at that time meant any of the urban areas, this united opposition led to a modified bill being passed, which allowed ministers to bar black Christians from worshipping, should anyone make a complaint. In response to this law, the Methodist Church publicly stated at their 1958 conference that all of the Methodist church ministers should ignore this bill and let the natives continue to worship regardless of complaint from white worshipers. The possibility of splitting the church into four separate churches - white, black, coloured and Indian - was also suggested but very quickly rejected, with the Methodist church deciding to continue with its stand of public unity. ...read more.

Many followed the opinion that politics should be kept separate from religion, so while they were preaching that all Christians should love their neighbour, just outside there were separate benches, drinking fountains etc, with many thousands of people being denied there basic human rights. Another problem was that the National Party was extremely well financed by the economic boom that occurred in South Africa. This meant that they could afford to enforce the apartheid laws and keep the majority of the population under the control of the wealthy minority. Most of the churches that were ready to face the rage of the National Party and make a public stand against apartheid were easily stopped by the police, which were under the National Party's control. Christian churches at the time were simply not strong enough to oppose the National Party because they did not have the same resources ready to use as the National Party. The most that could be collectively achieved was minor changes to racist legislation. Unfortunately, it took events such as Sharpeville and Soweto to outrage the churches so much that they felt they could not stand by and let this happen. Coupled with this it also took events such as the Soweto riots, to increase global awareness of the situation. So finally although all the churches spoke out against apartheid they did not achieve great results mainly due to a lack of unity and funding. But the amount of time that it took to overthrow the racist regime cannot be placed purely on the shoulders of the churches, it is possible to say that if other countries and foreign groups had acted sooner then the situation in South Africa would not have remained static for so long. ...read more.