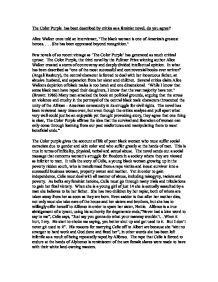 The Color Purple has been described by critics as a feminist novel, do you agree?

The Color Purple has been described by critics as a feminist novel, do you agree? Alice Walker once told an interviewer, "The black woman is one of America's greatest heroes. . . . She has been oppressed beyond recognition." Few novels of so recent vintage as 'The Color Purple' has generated as much critical uproar. The Color Purple, the third novel by the Pulitzer Prize winning author Alice Walker created a storm of controversy and deeply divided intellectual opinion. In what has been described as "one of the most successful and controversial books ever written" (Angeli Rasbury), the central character is forced to deal with her incestuous father, an abusive husband, and separation from her sister and children. Several critics claim Alice Walkers depiction of black males is too harsh and one dimensional. "While I know that some black men have raped their daughters, I know that the vast majority have not." (Brown: 1986) Many men attacked the book on political grounds, arguing that the stress on violence and cruelty in the portrayal of the central black male characters threatened the unity of the African - American community in its struggle for civil rights. The novel has been reviewed many times over, but even though the critics analyze and pull apart what very well could just be an enjoyable yet thought provoking story, they agree that one thing is clear, The Color Purple affirms the idea that the survival and liberation of women can only come through learning from our past misfortunes and manipulating them to meet beneficial ends." The Color purple gives the account of life of poor black women who must suffer social ostracism due to gender and skin color and who suffer greatly at the hands of men. ...read more.

From the moment Shug is introduced into the novel she makes a powerful impression on Celie, "Shug Avery was a woman. The most beautiful woman I ever saw. She more pretty then my mama". Whilst nursing Shug back to health, the two women become intimate friends. Shug gives Celie the courage to fight for what she believed in. She shows Celie a whole knew perspective on life. Shug constantly reminds Celie to speak out if something is wrong and not to do only what is instructed by others, "say whatever come to mind, forgit about polite". Henceforth Celie is no longer afraid of Albert "You a lowdown dog is what's wrong. It's time to leave you and enter into the creation. And your dead body is just the welcome mat I need". She realizes that women do not need men to survive because they can manage on their own. Shug calls Celie 'Miss Celie', giving her a new identity. This is critical to Celie's empowerment and sense of self. Unlike the men who subjugated Celie, Shug neither seeks to control or possess her. Celie subsequently forms a relationship with Shug which evolves from a maternal to an erotic attachment. It is through the development of Celie and Shug's relationship Walker introduces a new dimension of lesbianism into the novel. Celie is sexually attracted to women, not men. She tells us that she looks at women because she is not afraid of them, whereas all naked men "look like frogs". Walker emphasises the relationship between the development of selfhood and acceptance of female biology. It is through this in which her idea of varied multi-layered intimacy of women is revealed. ...read more.

Some of the women are also described poorly, such as Mrs. Millie. Futhermore, we are allowed to see the other side to Albert as he appears to transform by the end of the novel. His love of Shug units him and Celie and he becomes a more attractive. We are only allowed a degree of sympathy for him, however. He speaks the anti-womanist manifesto at the novel's heart "You black, you pore, you ugly, you a woman. Goddam, you nothing at all". Feminism has been defined as "challenging the relations between men (as a group) and women (as another)... and rebelling against all power structures, laws and conventions that keep women servile, subordinate and second best...women consciously working together for our rights". Walker has aimed to present a process of emancipation of a woman, body and soul, from the domination of men. At first, Celie is almost entirely in the power of Alphonso and Albert. She grows to be wholly independent of men. The idea of a free woman is more radical and feminist than the traditional idea of a good wife and mother. The novelist's success with the deleopment of character of Celie supports the controversial arguments she puts forward. This is why, in my opinion, The Color Purlple can be described as a feminist novel. She is a woman who triumphs through adversity to discover a proficient, content and proud woman hidden inside a young timid girl and her story is one that brings hope to any woman. This is shown through Celie's words, "Im pore, im black, I may be ugly and cant cook. But im here". Although the critics disagree about many aspects of this novel, one thing is clear- "The Color Purple affirms the survival and liberation of black women through the strength and wisdom of others". ...read more.