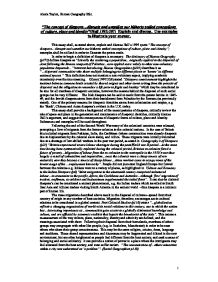 &quot;The concept of diaspora&amp;#133;disrupts and unsettles our hitherto settled conceptions of culture, place and identity&quot;(Hall 1995:207) Explain and discuss. Use examples to illustrate your answer.

"The concept of diaspora...disrupts and unsettles our hitherto settled conceptions of culture, place and identity"(Hall 1995:207) Explain and discuss. Use examples to illustrate your answer. This essay shall, as stated above, explain and discuss Hall's 1995 quote "The concept of diaspora...disrupts and unsettles our hitherto settled conceptions of culture, place and identity"; examples shall be utilised in order to illustrate the points made. In order to begin a definition of diaspora is necessary. The dictionary of Human Geography (p173) defines diaspora as "Literally the scattering a population...originally applied to the dispersal of Jews following the Roman conquest of Palestine...now applied more widely to other non-voluntary population dispersals..." however Introducing Human Geographies (p291) describes it as "...dispersed communities who share multiple belongings to different places or 'homes' in different national spaces." This definition does not mention a non-voluntary aspect, implying academic uncertainty over the true meaning. Gilroy (1997:328) stated "Diaspora consciousness highlights the tensions between common binds created by shared origins and other terms arising from the process of dispersal and the obligation to remember a life prior to flight and kinship" which may be considered to be true for all members of diasporic societies, however the reasons behind the dispersal of such social groups can be very different. The Irish diaspora can be said to result from the potato famine in 1845-49, and the Jewish diaspora stems from their banishment from Palestine by the Romans (as previously stated). ...read more.

(Social Geographies p110) Members of diasporic societies may emphasise with others sharing their ethnic origin, living in other countries, -"...very strong association of notions of diaspora with displacement and dislocation means the experience of location can easily dissolve out of focus" (Cartographies of Diaspora p180) -and those of differing ethnic origin who share the status of being an ethnic minority in their host society. Differences have developed between members of diasporic societies and both people in their 'base' society (e.g. Chinese living in China, and Chinese living in the U.K.) and members living in other countries (E.g. Chinese living in the U.K. and Chinese living in Canada.) Thus highlighting the importantance of place and space to identity. Cartographies of Diaspora (p242) states "...diaspora space...foregrounds what I have called 'entanglement of genealogies of dispersal'...the concept of diaspora space decentres the subject position of 'native', 'migrant', 'immigrant', in such a way...the native becomes a diasporean through this entanglement..." 'Ethnicity's often settle in cities, places known to be Examples of this are the many 'china towns' established in British urban areas, traditionally thought to be more accepting of difference. Such places are termed 'contact zones', and are spaces where members of the diasporic communities can congregate to meet like people, trade, shop, worship and socialise, as A Place in the World (p192) describes it "While subjugated peoples cannot readily control what emanates from the dominant culture, they do determine...what they absorb into their own and what they use it for...a phenomenon of the contact zone". ...read more.

feeling alienated from both their ethnic origins and the ethnically different host society. "diaspora cultures are not about a return to ...a point of origin or to fixed 'roots'. Instead diaspora cultures are characterised by 'routes' which make connections which cut across existing geographical and cultural boundaries". (Gilroy 1994, in Introducing Human Geographies p293). The displacement of colonial citizens at the end of the Second World War has prompted the development of hybrid cultures and multiple senses of place, within Britain and in the wider world. While the continuation of the characteristics, norms and values of the base society is championed by many members of diasporic groups, differences develop between the members of ethnic groups still residing in the 'original' homeland, those who live in a host society, and again between the diasporic groups established in differing 'host' societies, (due to asymmetrical relations) thus these groups can be characterised by both continuity and rupture. Attempts by a diasporic group to preserve a 'pure' culture can be considered a rebellion to racism and social alienation, and the establishment of contact zones can be seen as an attempt to create a 'safe' zone in a society that fails to adequately accept them. Members of host societies not adequately informed and even encouraged to hold negative (racist) social discourses by certain political groups, whereas a double hermeneutic approach should be encouraged. Post-colonial flows of ethnicity must lead to the re-definition of meaning and identity by all involved, but this should be seen as an intrinsic part of being British rather than a threat to it. ...read more.