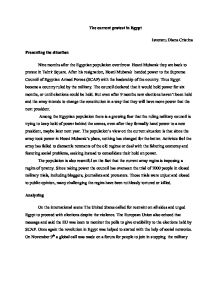 The current protest in Egypt. The populations view on the current situation is that since the army took power in Hosni Mubaraks place, nothing has changed for the better.

The current protest in Egypt Isvoranu Diana Cristina Presenting the situation Nine months after the Egyptian population overthrow Hosni Mubarak they are back to protest in Tahrir Square. After his resignation, Hosni Mubarak handed power to the Supreme Council of Egyptian Armed Forces (SCAF) with the leadership of the country. Thus Egypt became a country ruled by the military. The council declared that it would hold power for six months, or until elections could be held. But even after 9 months new elections haven't been held and the army intends to change the constitution in a way that they will have more power that the next president. Among the Egyptian population there is a growing fear that the ruling military council is trying to keep hold of power behind the scenes, even after they formally hand power to a new president, maybe later next year. The population's view on the current situation is that since the army took power in Hosni Mubarak's place, nothing has changed for the better. Activists feel the army has failed to dismantle remnants of the old regime or deal with the faltering economy and festering social problems, seeking instead to consolidate their hold on power. ...read more.

cities have responded to the online networks calls as part of a global day of solidarity to "defend the Egyptian revolution". The world wide popular opinion is supportive of the protesters. The Supreme Council of the Armed Forces (SCAF), the current ruling political party is made of 20 military members, each of whom were also in power in the old regim of Mubarak. The chairman for SCAF is Mohamed Hussein Tantawi (also the current acting head of state). The army is clearly much more organized that the protestors and has many more resources at their disposal. Even if the protestors aren't so well organized as the army, and they are split in much smaller subgroups (The Revolution Youth Coalition, The Muslim Brotherhood, the normal Egyptian civilian that wants a better life and women that want equal rights to men) they are far more organized than 9 months ago. Within days of the beginning of the protest they already assembled a hospital, in the protesting areas. The military tried to reach the makeshift hospital many times but they failed, because it was defended by protestors. ...read more.

The protest puts both the current government and the protestors in a difficult position. They are both interdependent. The government at this point is using brute force (tear gas, beatings, rubber bullets, etc) to scare the protestors and give up, or at some point they will have to appease the people. Because it's a civil conflict the conflict can't go on for a very long period of time. Doing so would hurt the economy, the culture of the country and it will be bad for everyone. The military government is unable to use extreme force publicly to scare the protestors because that would bring the EU Human Rights on their head and they will make bad international image. In my opinion the best step would be to open negotiations, but the only thing the protestors will accept is for the entire SCAF to resign and make due on the promises when Mubarak resign. The protesters are putting immense pressure on SCAF in that direction and are very confident. In my opinion SCAF will sooner of later have to comply in a way or another with the demands of the protesters, and the longer they wait, the more the protest will intensify. 1 http://www.democraticunderground.com/discuss/duboard.php?az=view_all&address=439x2267305 ...read more.