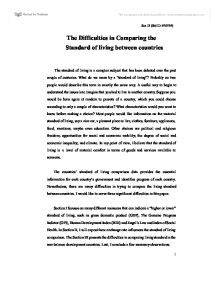 The Difficulties in Comparing the Standard of living between countries.

The Difficulties in Comparing the Standard of living between countries The standard of living is a complex subject that has been debated over the past couple of centuries. What do we mean by a "standard of living"? Probably no two people would describe this term in exactly the same way. A useful way to begin to understand the issues is to imagine that you had to live in another country. Suppose you would be born again at random to parents of a country, which you could choose according to only a couple of characteristics? What characteristics would you want to know before making a choice? Most people would like information on the material standard of living, say a nice car, a pleasant place to live, clothes, furniture, appliances, food, vacations, maybe even education. Other choices are political and religious freedom; opportunities for social and economic mobility; the degree of social and economic inequality; and climate. In my point of view, I believe that the standard of living is a level of material comfort in terms of goods and services available to someone. The countries' standard of living comparison data provides the essential information for each country's government and identifies progress of each country. Nevertheless, there are many difficulties in trying to compare the living standard between countries. I would like to cover three significant difficulties in this paper. Section ? focuses on many different measures that can indicate a "higher or lower" standard of living, such as gross domestic product (GDP), The Genuine Progress Indictor (GPI), Human Development Index (HDI) ...read more.

The changes in purchasing power for employees are illustrated by the yearly consumption of basic food items. With rising incomes, the share of expenditures for food (and, by extension, other) products declines (= Engel found, based on surveys of families' budgets and expenditure patterns, that the income elasticity of demand for food was relatively low). The resulting shift in expenditures affects demand patterns and employment structures. [Engel's Law does NOT suggest that the consumption of food products remains unchanged as income increases! It suggests that consumers increase their expenditures for food products (in % terms) less than their increases in income. ] Index of Social Health. Marc Miringoff is director of the Fordham University Institute for Innovation in Social Policy. Marque-Luisa Miringoff is a professor of sociology at Vassar College. Together, they developed the Index of Social Health, which they describe as "a broadbased gauge of the social well-being of the nation, similar in concept to the Dow Jones Average or the Gross Domestic Product." Published annually since 1987, the index uses government data for 16 social indicators to create profiles and rankings for all 50 states. In 2001, Iowa ranked number one with a score of 73 out of 100.4 The Sixteen Indictors in the Index of Social Health 1. Affordable housing 2. Alcohol-related traffic fatalities 3. Child poverty 4. High school completion 5. Infant mortality 6. Teenage births 7. Unemployment 8. Wages 9. Age 65-plus poverty 10. Child abuse 11. Health care coverage 12. Inequality in family income 13. Life expectancy 14. Teenage drug use 15. ...read more.

Last but not the least, there is a big gap between urban and rural in developing countries, if only believe in numbers, it will be dangerous that you will avoid the undeveloped part of your own country. Reference: 1 Human Development Report, 2003, FAQs on the Human Development Indices, "What is the human development index (HDI)?",http://www.undp.org/hdr2003/faq.html#21 [accessed September 15,2003]. The HDI - human development index - is a summary composite index that measures a country's average achievements in three basic aspects of human development: longevity, knowledge, and a decent standard of living. Longevity is measured by life expectancy at birth; knowledge is measured by a combination of the adult literacy rate and the combined primary, secondary, and tertiary gross enrolment ratio; and standard of living by GDP per capita (PPP US$). For details on how to calculate the HDI, see pages 340-341 Technical Note 1. 2 Kuznets, Simon. 1941 "National Income and Its Composition", 1919-1938. New York: National Bureau of Economic Research. 3 Ernst Engel, a [19th century] German statistician. 4 The Ledger: Winter 2003, "How do We measure Standard of Living", http://www.bos.frb.org/genpubs/ledger/ledger03/winter/measure.pdf [accessed September 16, 2003] 5Pocket World in Figures, 2001, The Economist Books Ltd. PPP statistics adjust for cost of living differences by replacing normal exchange rate with rates designed to equalize the prices of a standard "basket" of goods and services. These are used to obtain PPP estimates are normally shown on a scale of 1 to 100, taking the United States as 100. 6 Big Mac Currencies, April 21st, The Economist print edition Sun Di (Std ID: 030703) 1 10 ...read more.