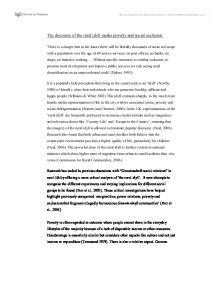 The discourse of the rural idyll masks poverty and social exclusion

The discourse of the rural idyll masks poverty and social exclusion 'There is a danger that in the future there will be literally thousands of areas in Europe with a population over the age of 60 and no services: no post offices, no banks, no shops, no bakeries, nothing ... Without specific measures to combat exclusion, to promote rural development and improve public services we risk seeing rural desertification on an unprecedented scale' (Delors, 1993). It is a popularly held perception that living in the countryside is an 'Idyll' (Newby, 1980) of friendly, close-knit individuals who are generous, healthy, affluent and happy people (Williams & White 2002) This idyll contrasts sharply to the much more hostile media representations of life in the city with its associated crime, poverty and social defragmentation (Wainer and Chesters, 2000). In the UK, representations of the 'rural idyll' are frequently portrayed in numerous media formats such as magazines and television shows like 'Country Life' and 'Escape to the Country', ensuring that the imagery of the rural idyll is allowed to dominate popular discourse (Neal, 2006). Research also found that both urban and rural dwellers both believe that the countryside environment provides a higher quality of life, particularly for children (Neal, 2006). The powerful draw of the rural idyll is further evident in national statistics which show higher rates of migration from urban to rural localities than vice versa (Commision for Rural Communities, 2006 Commision for Rural Communities 2006. ...read more.

Milbourne's (2004b) research discovered two important motivating factors behind middle-class movements to rural areas. Firstly rural space appeals because it is anti-urban. It is distanced both spatially and socially from the negative aspects of urban living and the perceived social disorder of drugs, crime and anti social behaviour. In another sense, the rural space is a pull factor with the positive perception of the 'rural idyll' with clean air, green fields and traditional close knit lifestyles. Second home ownership can lead to strong feelings of exclusion and resentment in rural local communities (Paris, 2007). In 2005 a local protest group with the legend ALL1 began vandalising holiday homes in the Cumbrian seaside village of Haverigg echoing problems in Wales in the 1980s, when the group Meibion Glyndwr burned down holiday homes owned by people from outside Wales (The Times.co.uk, 23/05/05). Other groups have such as PLAW2 have also threatened holiday homes in the Kendall area. A recent letter from the group to the local paper stated 'The Popular Liberation Army of Westmorland hereby pledges that we will one day see an end to the occupation of Westmorland by incomers, holiday home owners and the encroaching leech-like scum of that ilk' ( The Telegraph.co.uk, 23/06/07). The reduced levels of social housing have also contributed to the housing problem. Since 1980 the Conservative introduced 'right to buy' scheme has significantly reduced social housing stock levels in both urban and rural areas of the UK. ...read more.

To help alleviate this benefits trap it is inadequate to focus solely on the supply side of the labour market: the creation of better quality and higher paid jobs in rural areas is required (Breeze, et al, 2000). This short essay has attempted to include many of issues that can lead to poverty and exclusion in rural areas particularly for the unskilled, elderly, children and young families. Many of the issues are a fluid process which is invariably linked to the changing face of the world economy and the affects that it places upon employment in both urban and rural areas. Many of the rural areas that once relied on the mining industry and other primary industries are reliant on government intervention to reinvent themselves and form new identities and economic opportunities. The Rural White Paper (2000) placed greater emphasis on enabling and empowering rural people to take greater control over their own destinies through 'bottom-up' development approaches. Some of these schemes included rate cuts for rural businesses and services, increased investment in rural public transport, increasing the powers of parish councils and increasing the number of farmers markets. These approaches however have been hampered by the changing governance of rural areas (Shucksmith, 2003). This change has led to a lack of integration between the host of agencies involved in rural governance, drawn from the public, private and voluntary sectors, in a "nobody in- charge-world". Without more integration, planning and focus the various strategies will continue to be effective only on a case by case basis rather than produce a long term solution to rural poverty and social exclusion. ...read more.