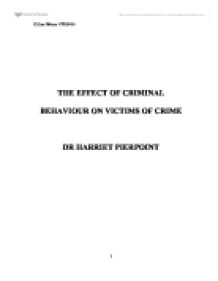 THE EFFECT OF CRIMINAL BEHAVIOUR ON VICTIMS OF CRIME

said that Children and adolescents who have been sexually abused could suffer a range of psychological and behavioural problems, from mild to severe, in both the short and long term. These problems typically include depression, anxiety, guilt, fear, sexual dysfunction, withdrawal, and acting out. Depending on the severity of the incident, victims of sexual abuse may also develop fear and anxiety regarding the opposite sex or sexual issues and may display inappropriate sexual behaviour. However, the strongest indication that a child has been sexually abused is inappropriate sexual knowledge, sexual interest, and sexual acting out by that child. Munro (2000) said that perpetrators of sexual child abuse are most often someone the child knows and trusts. As far as they know, perpetrators, are most often male relatives, including fathers, brothers, grandfathers, uncles and cousins; friends of the family; or neighbors. Perpetrators can also be female, including mothers, sisters, aunts, babysitters, and grandmothers. Usually the perpetrator has easy access to the child because s/he has sole responsibility for the child, or takes care of or visits the child, and is trusted by the child's parents. Dominguez et al (2002) found out in his research, one out of three females and one out of five males have been victims of sexual abuse before the age of 18 years. ...read more.

It is prohibited to pull medical records without the patients' consent, so the victim or at least the victim's family must first give their approval before the data can be released. In the interviews, questionnaires must be given to the interviewees so they can organize their thoughts and give summarized yet straightforward answers. If any of the interviewees have been involved in any case they are welcome to include any data regarding that particular case to substantiate the research. IV. DISCUSSION OF ETHICAL ISSUES In this study, we shall take into consideration the following ethical issues during the conduction of the research: * Scope and definition of sexual child abuse * Approval/disapproval of victim's/victim's family in releasing their medical records or participating in the research * Maintaining confidentiality in the victims' part while presenting the research * Maintaining the confidentiality of other names involved in special presented cases (e.g. mother, friend, witness) REFERENCE American Psychological Association, What are the Effects of Child Sexual Abuse? (c)PsycNET 2001. Dominquez, R. Z., Nelke, C.F. and Perry, B.D. Child Sexual Abuse in: Encyclopedia of Crime and Punishment Vol 1. (David Levinson, Ed.) Sage Publications, Thousand Oaks pp 202-207, 2002. Faller, Kathleen C. 1993. Child Sexual Abuse: Intervention and Treatment Issues. . Diane. Smith, Donna, The support needs of young victims of crime: A research report. Victim Support Norfolk: May 2007 (c) Victim Support. http://www.apa.org/releases/sexabuse/effects.htm. http://www.kalimunro.com/article_sexualabuse.html. http://www.darkness2light.org/KnowAbout/statistics_2.asp. Gillian Waters 07019416 1 ...read more.