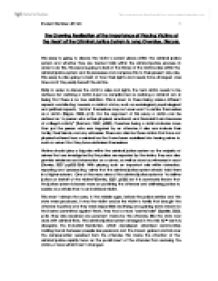 The Growing Realisation of the Importance of Placing Victims at the Heart of the Criminal Justice System is Long Overdue. Discuss.

The Growing Realisation of the Importance of Placing Victims at the Heart of the Criminal Justice System is Long Overdue. Discuss. This essay is going to discuss the victim's current place within the criminal justice system and whether they are treated fairly within the criminal justice process. In order to do this, this essay is going to look at the history of the victims roles within the criminal justice system and its processes and compare this to their present day role. This essay is also going to look at how their rights and needs have changed over time and if they really benefit the victims. Firstly in order to discuss the victim's roles and rights, the term victim needs to be defined, but defining a victim is just as complicated as defining a criminal act, in being that there is no true definition. This is down to there being various different aspects contributing towards a victim's status, such as sociological, psychological and political aspects, 'victims' themselves may not even want to define themselves as a victim (Digan, 2005, p13). ...read more.

The criminal justice system emerged in the mid 20th century alongside the Industrial Revolution, which developed urbanised communities making bonds between people less personal, and the Crown gained control over the compensation received from the offender, this made the attention of the criminal justice rapidly focus on the punishment of the offender than restoring the victim, a focus which hasn't changed. Victims suffered from many issues and concerns when the state reduced their role within the justice process, mainly in the form of secondary victimization. This is where the victim is subsequently harmed even more through the criminal justice system and its process, (Newburn, 2007) the media can also cause secondary victimization. It has been known that victims have suffered from a number of the criminal justice agencies, they have been neglected by the police, the Crown Prosecution Service and the courts; they have been blamed for the crimes committed against them by the police, the courts and the media. Victims had too, still do, stand up in court and they have to defend themselves and their actions as to why they were victimized against (Carrabine, Iganski, Lee, & Plummer, 2004). ...read more.