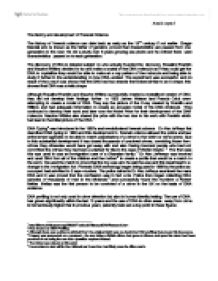 The History and Development of Forensic Science

The history and development of Forensic Science. The history of forensic science can date back as early as the 19th century if not earlier. Gregor Mendal who is known as the father of genetics, proved that characteristics are passed from one generation to the next. He did a study over 8 years growing sea plants and he noticed there were characteristics passed on to each generation. The discovery of DNA is debated subject on who actually founded the discovery. Rosalind Franklin and Maurice Wilkins decided to try and make a crystal of the DNA molecule as if they could get the DNA to crystallize they would be able to make an x-ray pattern of the molecule and being able to study it further in the understanding on how DNA worked. The experiment was successful and on result of the x-ray it was shown that the DNA had two strands that looked similar to an X shape, this showed that DNA was a helix shape. Although Rosalind Franklin and Maurice Wilkins successfully created a crystallized version of DNA they did not develop their findings further. In 1953 James Watson and Francis Crick were attempting to create a model of DNA. They say the picture of the X-ray created by Franklin and Wilkins and had adequate information to create an accurate model of the DNA Molecule. They continued to develop their work and later won the Nobel Prize for their development of the DNA molecule. Maurice Wilkins also shared the prize with the two due to his work with Franklin which had lead to the initial picture of the DNA1. ...read more.

It was discovered they owed money but they both had alibis for the murder. On a more intense search they found shoe prints matching those found on the victims T-shirt. During their interrogation by the police, Alex confessed but David denied all knowledge of the crime and was later released as there was no evidence linking him to the victim. Rope was found in the car Alex owned and it was analysed to see if it matched the rope used to strangle the victim, results confirmed that it was indeed the rope used to kill the victim. Boots were later found in his room which were analysed as well, these were found to have blood splatters on, the blood matched the victims and when the splatters were studied it was found that it matched the blows that were inflicted upon the victim. On close inspection of the blood splatters on the wall, it was found that a shadow had been formed on the wall confirming there were definitely two people present at the time of the murder. David was re-arrested and later convicted with Alex and sentenced to life imprisonment without parole. In this case the analysis of not only the blood type but also the splatters on the wall lead to a 2nd conviction, it is of paramount importance that all blood is analysed as killers could walk free. The development of this aspect of forensic science is advancing all the time, and is a key factor within the history of forensic science. ...read more.

The forensic evidence found in this case was compelling and covered all aspects of DNA, Fingerprinting, ballistics and blood. It shows how far technology has come and the development of forensic science. The science is ever developing and will continue to do so as the years go on. Experts who study the different aspects of forensic science help to catch killers, rapists and other such criminals by piecing together the broken puzzle of a crime scene and using all the different aspects of forensic science to ensure that the right person is tried in court and that no further miscarriages of justice happen. 1 http://library.thinkquest.org/20830/Textbook/HistoryofDNAResearch.htm 2 Now known as DNA Profiling 3 Although there was evidence withheld from the original trial it was no doubt the DNA profiling that proved his innocence. 4 Forgery was suspected on a passport - the son being a British citizen had gone to Ghana and upon his return had been accused of not being the son but a possible nephew instead. 5 The father was absent at this point 6 It was wiser to start within the midlands as it was the most likely area the killer was in. 7 http://www.genewatch.org/sub-539481 8 These include the feet lips ears and many more. 9 Grease of the skin. 10 Pottery is an example where this may happen 11 He claimed to have been asleep throughout the whole ordeal taking place, however he described Kermit as a violent alcoholic who beat children with a belt. It was also claimed that Kermit was a child molester too. His mother used to hit him with wood and apparently took her son to bed. ?? ?? ?? ?? Amelia Jayne 1 ...read more.