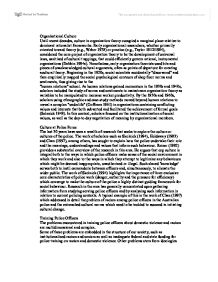 The last 30 years have seen a wealth of research that seeks to explore the culture or cultures of the police. The work of scholars such as Skolnick (1994), Holdaway (1983) and Chan (1997), among others, has sought to explain how the police undertake their

Organizational Culture Until recent decades, culture in organization theory occupied a marginal place relative to dominant rationalist frameworks. Early organizational researchers, whether primarily oriented toward theory (e.g., Weber 1978) or practice (e.g., Taylor 1912/1984), considered the core project of organization theory to be the development of universal laws, sanitized of cultural trappings, that could efficiently govern rational, instrumental organizations (Dobbin 1994a). Nonetheless, early organization theorists used bits and pieces of unacknowledged cultural arguments, often as points of departure for creating acultural theory. Beginning in the 1920s, social scientists accidentally "discovered" and then empirically mapped the social psychological contours of shop floor norms and sentiments, thus giving rise to the "human relations" school. As human relations gained momentum in the 1930s and 1940s, scholars included the study of norms and sentiments in mainstream organization theory as variables to be manipulated to increase worker productivity. By the 1950s and 1960s, scholars using ethnographic and case-study methods moved beyond human relations to reveal a complex "underlife" (Goffman 1961) in organizations containing conflicting values and interests that both subverted and facilitated the achievement of formal goals (Selznick 1948). In this context, scholars focused on the institutionalization of social values, as well as the day-to-day negotiation of meaning by organizational members. Culture at Police Force The last 30 years have seen a wealth of research that seeks to explore the culture or cultures of the police. The work of scholars such as Skolnick (1994), Holdaway (1983) and Chan (1997), among others, has sought to explain how the police undertake their role and the meanings, understandings and values that inform such behaviour. Reiner (1992) ...read more.

D. Gottfredson, Gottfredson, Payne, & Gottfredson, 2005; Mayer & Leone, 1999). A very small number of recent studies also have begun to explore perceptions of legitimacy among authority figures themselves (Kreisel, 1998; Sviridoff & McElroy, 1989; Walker, 1999). This is an important issue for two reasons. One is that because police officers are in a very different power position relative to non-authorities, it is unclear whether procedural justice similarly shapes their perceptions of fairness and resulting willingness to abide by policing codes of conduct. Two is that if police officers' willingness to abide by codes of conduct is indeed shaped by their perceptions of legitimate authority, understanding the factors that influence this process is an important aspect of training police officers and improving police performance. In an earlier article (De Angelis & Kupchik, 2007a), the current authors analyzed data from surveys of police officers to demonstrate that procedural justice theory applies to police officers, much as it does to the general public. That research found that police officers' satisfaction with the investigation and adjudication of citizen complaints against them depended more on (1) their perceptions of legitimacy of police command staff and internal affairs, and (2) how fairly they are treated during the process, than it did on the outcomes of the complaint. Additionally, in a recent article by Tyler, Callahan, and Frost (2007), the authors found similar results with regard to law enforcement officers' and soldiers' views of procedural justice and deference to authority. In both groups, perceived legitimacy of authority significantly predicted adherence to rules. Though the theoretical premise of procedural justice and legitimacy is not new, recent research has done a great deal to clarify the mechanisms through which this process works. ...read more.