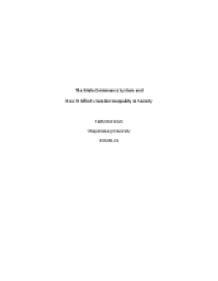 ﻿The Male-Dominance System and How It Affects Gender Inequality in Society Katherine Glock Shippensburg University SOC241-01 Abstract This paper looks at society to determine if today?s society is mostly male dominated or not. According to several studies done by sociologists and personal experiences, it appears that most societies in the world today are male dominated. It is found that male dominance is learned at a very early age with childhood socialization from the parents of the children. Boys are given more freedom than girls, as well as the difference in toys. Girls are encouraged to be more domestic with household chores than boys are. Women also tend to be objectified in advertisements around the world as well as portrayed to be ?perfect? looking, physically. This is a problem because if the media is showing that it is okay to look at women as objects, violence can often occur. This is especially because a lot of advertisements portray sexual violence as appealing which leads to men?s desire for rape. Finally women are widely discouraged around the country for entering the labor force instead of taking care of their children and household chores. Is our society mostly male dominated or female dominated? Most people would answer that most societies in the world are male dominated. Understanding the male dominance system in our world is important to women and all society because, as a woman, it seems as though we feel weak and unimportant in comparison to the men of our society. ...read more.

As mentioned earlier, we still live in a very male-dominated society; however, according to sociology professor Robert Pineda-Volk, as far as exploitation and progress go, females have made great progress as far as careers go. Although men still dominate the fields of engineering and math, women have made very noticeable progress when it comes to professions in biology, business and humanities. As far as law goes, females are overrepresented in legal aid and family law. On the other hand, females are underrepresented in corporate law as well as medicine. Females are seen more as a nurse-type than a doctor so females dominate the field of nursing, but are making progress in becoming doctors. Another example of exploitation is tokenism. Some examples of tokenism in society include the feminization of poverty. Two thirds of the poverty population is females. Pink Collar Ghettos (when certain occupations are almost all female) are another example. Some examples of Pink Collar Ghettos are elementary school teachers, social workers, and administrative jobs. Another example of tokenism in society is the unequal pay for females. Latina females earn 54 cents for every dollar that a man makes and African American females make 62 cents for every dollar a male makes. Overall, females are only making 77 cents for every dollar a male earns. ...read more.

Women’s decisions to enroll in college are greatly affected by their family’s class, race and which gender the family is dominated by (Beattie 2002). In conclusion, the hypothesis that we live in a male dominated society can be supported. Male domination of society is taught and learned at a very young age with childhood socialization using “wings” (freedom) and “roots” (no freedom) method for young boys and girls. The types of toys for children are also a huge factor in what kind of job the children want to achieve when they are older. On the bright side, women have made substantial progress in fields such as biology, business and humanities, but they still trail the males of society in the math and engineering fields. Women being objectified and portrayed sexually in advertisements is another big reason for a male dominated society as well as the discouraging attitudes from people towards females’ participation in the labor force of society. Although it appears that we are a male dominated society, the progress of women cannot be overlooked. Research has shown that women are slowly and steadily rising in society, however, biased and stereotypical attitudes towards women will never go away completely. We as a society need to stop being so naïve and recognize this problem and come up with a solution, whether it means educating one another or opening our minds and seeing it with our own eyes. ...read more.