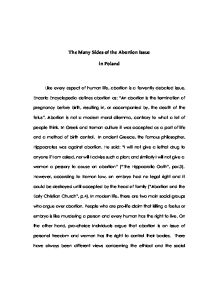 The many sides of abortion issue in poland

The Many Sides of the Abortion Issue in Poland Like every aspect of human life, abortion is a fervently debated issue. Encarta Encyclopedia defines abortion as: "An abortion is the termination of pregnancy before birth, resulting in, or accompanied by, the death of the fetus". Abortion is not a modern moral dilemma, contrary to what a lot of people think. In Greek and Roman culture it was accepted as a part of life and a method of birth control. In ancient Greece, the famous philosopher, Hippocrates was against abortion. He said: "I will not give a lethal drug to anyone if I am asked, nor will I advise such a plan; and similarly I will not give a woman a pessary to cause an abortion" ("The Hippocratic Oath", par.3). However, according to Roman law, an embryo had no legal right and it could be destroyed until accepted by the head of family ("Abortion and the Early Christian Church", p.4). In modern life, there are two main social groups who argue over abortion. People who are pro-life claim that killing a foetus or embryo is like murdering a person and every human has the right to live. On the other hand, pro-choice individuals argue that abortion is an issue of personal freedom and woman has the right to control their bodies. ...read more.

There are a number of reasons why pro-life individuals do not support abortion. First of all, abortion is considered murder of unborn, innocent child. According to Professor Bogdan Chazan, obstetrics and gynecology specialist, from the time of conception the embryo is a live human being and it has right to life. What is more, when a woman decides to abort a child, in the instance of rape and incest, she punishes the unborn baby instead perpetrator. Adoption regarded as an alternative to abortion would give the child its right to life. There are many people who cannot have child on their own and are eager to adopt a child and provide it with a loving home. The second side to the debate is pro-choice. In Poland it is about 47% of population. It is a groups of people like Polish Feminists Association (PFA) or that claim that "a woman should have complete right over her fertility" ("Arguments for Pro Choice Abortions", par.4). It means that embryo is considered to have no right. The main argument of "pro-choice" advocates is that women should be in control of their own bodies and lives and have a legal way of doing so. Carlton Veazey, President, Religious Coalition for Reproductive Choice, is pro-choice supporter and he claims that "you [woman] are responsible for your decisions, but God has given you that responsibility, that option to make decisions" ("Pro-Choice Does Not Mean Pro-Abortion"). ...read more.

Abortion is unethical and morally wrong but should be legal only in cases such as the threat of life of the mother or child, or rape. Abortion will always be a commonplace in society. Sometimes pregnancy happens because of lack of sexual education or because contraception failed; sometimes it occurs at the wrong time. There are various reasons why women choose to have the abortion. Other reasons for abortion cannot be justify because each person, however, has to take responsibility for their own actions and abortion should not be used as a form of contraception. Women in difficult personal situation seek the termination of unwanted pregnancy at all costs, apart from the fact that they break the law, often risking their health or life. But when that happened that a woman is in a crisis situation and she is not able to raise a child she can choose adoption or leave a child in a baby hatch to safe new life. What is more, abortion should be no longer a taboo subject. If people dare to discuss openly the matter it can bring only advantages because teenagers would be told the facts of life, they would know contraceptive methods and possible result in having sex. Unfortunately, it will take time before people start talking about sex, pregnancy and abortion without obstacles and difficulties. ...read more.