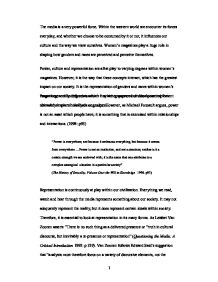 The media is a very powerful force.

The media is a very powerful force. Within the western world we encounter its forces everyday, and whether we choose to be consumed by it or not, it influences our culture and the way we view ourselves. Women's magazines play a huge role in shaping how genders and races are perceived and perceive themselves. Power, culture and representation are all at play to varying degrees within women's magazines. However, it is the way that these concepts interact, which has the greatest impact on our society. It is the representation of genders and races within women's magazines, and the degrees to which they are empowered or disempowered that ultimately impacts heavily on our culture. Power is generally defined as a form in which groups or individuals can implement control over other individuals or groups. However, as Michael Foucault argues, power is not an asset which people have; it is something that is exercised within relationships and interactions. (1998: p93) "Power is everywhere; not because it embraces everything, but because it comes from everywhere....Power is not an institution, and not a structure; neither is it a certain strength we are endowed with; it is the name that one attributes to a complex strategical situation in a particular society" (The History of Sexuality, Volume One: the Will to Knowledge 1998. ...read more.

in place that do limit their power. In addition, both Herman and Tiffen are primarily referring to the news media. Women's magazines do not fulfil the same purpose as news programs and newspapers, and rarely contain political content, which is often the centre of discretion. Women's magazines supply similar content, every issue to a certain market. Subsequently, there is not the same scope for large media corporations to exercise its power in relation to content. Along the same lines as Herman and Tiffen, but speaking in terms of the audience rather than journalists, the German intellectual Adorno believes that the "culture consumed by the masses is imposed form above - churned out by the culture industry" (1991: p86). Women's magazines are one of the most obvious mediums in which this power is evident. Feminists and media critics often argue that women's magazines provide certain values, messages and ideas that are not only unrealistic and unattainable, but promote the oppression of women. Looking at the front cover of numerous women's magazines, it is easy to find evidence to support Adorno's argument. Whilst almost every magazine on the market at the moment has a digitally enhanced photograph of an incredibly slim woman on the front, it is the words that accompany them that help to explain why poor self image is pandemic in our culture. ...read more.

However, there is also a much less publicized racial and sexual misrepresentation or under representation, evident throughout women's magazines. Foucault, Gauntlett and Adorno all follow the line of argument that misrepresentation is imbedded in the media, because its content encourages conformity. "The concepts of order which (the culture industry) hammers into human beings are always those of the status quo". (1991: p90) In Australia we live in a multicultural society, and yet white female women still dominate on the pages of most women's magazines. Throughout NW, Woman's Weekly, Cosmo and New Idea, the only slight diversion from this look was photographs of black celebrities in America, not in Australia. Women's magazines tend to take the same line in relation to lesbian, gay and bi-sexual people. Despite the fact that tolerance of sexual diversity is growing in our society, and Australia has one of the most accommodating gay communities in the world, heterosexuality is still promoted as the "norm". These three points highlight that the way gender and race is presented within women's magazines does not adequately reflect the true nature of society. However, following Karen Jennings (Theorising Race and Representation p9) and Van Loonen's argument (1995: p319), these factors actually represent a way of thinking within our culture. The media do not simply reflect or mediate reality. Rather they utilize certain conventions and codes, both aesthetic and technical, to re-present things to us. ...read more.