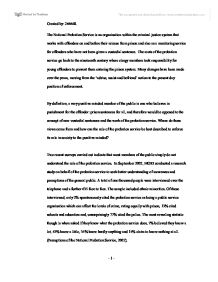 The National Probation Service is an organisation within the criminal justice system that works with offenders on and before their release from prison.

The National Probation Service is an organisation within the criminal justice system that works with offenders on and before their release from prison and also as a monitoring service for offenders who have not been given a custodial sentence. The roots of the probation service go back to the nineteenth century where clergy members took responsibility for young offenders to prevent them entering the prison system. Many changes have been made over the years, moving from the 'advise, assist and befriend' notion to the present day position of enforcement. By definition, a very punitive minded member of the public is one who believes in punishment for the offender: prison sentences for all, and therefore would be opposed to the concept of non-custodial sentences and the work of the probation service. Where do these views come from and how can the role of the probation service be best described to enforce its role in society to the punitive minded? Two recent surveys carried out indicate that most members of the public simply do not understand the role of the probation service. In September 2002, MORI conducted a research study on behalf of the probation service to seek better understanding of awareness and perceptions of the general public. ...read more.

In a Home Office press release on October 28th, an enhanced community punishment order was introduced which directly addresses anti-social behaviour, poor thinking skills and poor employment skills. Announcing this national roll out, Eithne Wallis, director general of the probation service said: "Each year offenders have to do seven million hours of rigorous work for their community as their punishment. It is strictly applied and enforced. As well as being a tough punishment, it cuts crime. It gives offenders new skills that change anti-social behaviour, makes meaningful amends to local communities and is designed to reduce re-offending by building on best practice and lessons learnt" Far from being a "soft option" as earlier stated by punitive members of the public, community orders require a lot of dedication from the offender to actually succeed. If the offender misses two appointments, programmes or days at work, or breaches their drug treatment and testing order, occupational guidelines state the probation officer has to enforce the order and send them back to Court for reassessment, which could result in them being sent to prison instead. Punitive members of the public of course believe prisons to be the most effective form of punishment for offenders but the following are accounts from prisoners and offenders on community punishment. ...read more.