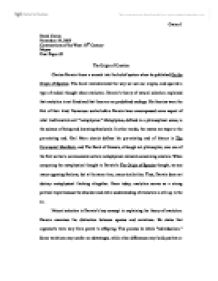 The Origin of Creation

Derek Gwinn November 23, 2003 Conversations of the West: 19th Century Meyns Final Paper #3 The Origin of Creation Charles Darwin threw a wrench into the belief system when he published On the Origin of Species. This book revolutionized the way we see our origins, and spurred a type of radical thought about evolution. Darwin's theory of natural selection explained that evolution is not fixed and that there are no predefined endings. His theories were the first of their kind. Numerous works before Darwin have encompassed some aspect of what traditionalists call "metaphysics." Metaphysics, defined in a philosophical sense, is the science of being and knowing absolutely. In other words, the means are steps to the pre-existing end. Karl Marx clearly defines his pre-existing end of history in The Communist Manifesto, and The Book of Genesis, although not philosophic, was one of the first works to communicate certain metaphysical elements concerning creation. When comparing the metaphysical thought to Darwin's The Origin of Species thought, we see many opposing factions, but at the same time, many similarities. Thus, Darwin does not destroy metaphysical thinking altogether. Even today, evolution serves as a strong political topic because the absolute and entire understanding of evolution is still up in the air. Natural selection is Darwin's key concept in explaining his theory of evolution. Darwin examines the distinction between species and variations. ...read more.

This was seen with the idealistic creation of Heaven. Darwin's theory goes against the traditional metaphysical account seen in Genesis in many ways. Darwin explained evolution is not fixed and that there are no predefined endings. However, Genesis reveals that God created all the kinds and their variations (Genesis 1:21). What is odd about this interpretation is that species and their subspecies must be fixed and unchanging. There can be no variation from the outside environment. If this was true then animals could not adapt to their surroundings if the atmosphere changed, which as Darwin puts it, would cause extinction for many species. Another difference is that in Genesis, animals were created so that man may dominate over them, which implies that man is a semi-God. However in Darwin, animals evolved from same single celled organisms as humans, thus man is nothing special as he is one of many organisms. However, both Darwin and Genesis have a type of Metaphysical element in terms of creation. Darwin has absolutely no explanation for the origin of life. Thus Darwin assumes creation and beginning of existence as an absolute fact, a type of being. This takes on a metaphysical element. While in Genesis, it was said that God created all animals and predetermined their variations. There are absolutely no events or occurrences that have not already been created in Genesis. ...read more.

If a variation makes the offspring better suited to survive or to successfully reproduce then that offspring and its descendants will be more likely to survive than those offspring without the perfect variation. This strive for "perfect traits" can be seen as a "Parmenidean" discourse. Though Darwin provides an excellent base for the debate about origins, it is still not complete. Evolution can still be seen as either fixed or unfixed depending on one's own interpretation. The history of origins is nowhere near being finished. There are still some areas of Darwin's work that are fully undeveloped. For instance, the fossil record does not account for discontinuities at the Class level. By falling into complete agreement with Darwin, some of our history will remain a mystery. We must continue to look into evolution and our origins. Traditionalists must be wary of doing the same, but with complete faith to the words within Genesis. The interpretation of Genesis has some flaws in it, thus it cannot be given complete trust. As we move further into this new millennium, we must not accept everything that we have already learned. We must try to probe deeper into the idea of our origins, while keeping our assumptions of Darwin and metaphysics contained. As both ideas have their faults, we must use this as our motivation to continue our studies. By continuing with our research, we will hopefully, one day, come to the final and complete explanation that will give us the entire history of the origin of species. Gwinn 1 ...read more.