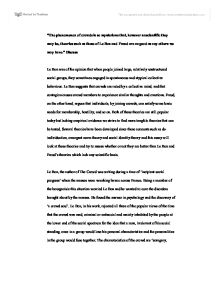 &quot;The phenomenon of crowds is so mysterious that, however unscientific they may be, theories such as those of Le Bon and Freud are as good as any others we may have.&quot; Discuss

"The phenomenon of crowds is so mysterious that, however unscientific they may be, theories such as those of Le Bon and Freud are as good as any others we may have." Discuss Le Bon was of the opinion that when people joined large, relatively unstructured social groups, they sometimes engaged in spontaneous and atypical collective behaviour. Le Bon suggests that crowds are ruled by a collective mind, and that contagion causes crowd members to experience similar thoughts and emotions. Freud, on the other hand, argues that individuals, by joining crowds, can satisfy some basic needs for membership, hostility, and so on. Both of these theories are still popular today but lacking empirical evidence we strive to find more tangible theories that can be tested. Several theories have been developed since these accounts such as de-individuation, emergent norm theory and social identity theory and this essay will look at these theories and try to assess whether or not they are better than Le Bon and Freud's theories which lack any scientific basis. Le Bon, the author of The Crowd was writing during a time of 'incipient social progress' when the masses were wreaking havoc across France. Being a member of the bourgeoisie this situation worried Le Bon and he wanted to cure the disorders brought about by the masses. He found the answer in psychology and the discovery of 'a crowd soul'. Le Bon, in his work, rejected all three of the popular views of the time that the crowd was mad, criminal or antisocial and mainly inhabited by the people at the lower end of the social spectrum for the idea that a man, irrelevant of his social standing, once in a group would lose his personal characteristics and the personalities in the group would fuse together. ...read more.

They found that the less individual subjects viewed themselves and each other the more 'rash and daring' were their contributions to the conversation. Singer, Brush and Lublin (1965) conducted a study where subjects had to talk about erotic literature. They found that those wearing lab coats and thus seen as non-identifiable used more obscene language than the more identifiable subjects. Both of these studies demonstrate that people, when de-individuated will behave differently and Singer attributed theses finding to reduced feelings of self-consciousness and distinctiveness. Le Bon (1985) went on to say that people would behave in more extreme ways in crowds because they lose their sense of identity. Zimbardo believes that the crowd provides a 'cloak of anonymity' and diffuses personal responsibility for the consequences of an individual's actions. He details two types of behaviour, individuated, when behaviour is rational, controlled and consistent with personal norms and de-individuated behaviour, which acts on primitive impulses, is anti social, unrestrained. He believes that this behaviour is caused by being a member of a crowd or when wearing a uniform as loss of individual identity and a reduced concern for social evaluation. Zimbardo (1969) has carried out several experiments on de-individuation and anonymity. One experiment showed that de-individuated people (in this case they were dressed in lab coats and hoods) had a stronger tendency towards aggressive behaviour (e.g. total duration of shocking was twice as much for the de-individuated group compared to the identifiable condition). Another experiment that Diener (1976) made in the same area was on a group of Belgian soldiers. However, the result was the reverse- the soldiers had a shorter shocking time than the 'normal' people did. ...read more.

The third idea in social identity theory is the idea of comparison. This is when we evaluate ourselves in relation to others. By looking to others groups we can higher our self-esteem, which in turn leads to a positive image of the self, which is essential to healthy functioning. By identifying ourselves as being in a group we then learn the norms of that group and can find out what the limits of the group are. In order to test his theory, Reicher conducted some experiments to test how attitudes change when social identity is prevalent. One of his investigations found that social science students were more antivivisection and science students more pro-vivisection when they were divided in their respective subject groups than when they were mixed together. He found that personal identity is replaced in a group situation by social identity. Reicher also analysed data from the St. Paul's riots which occurred in Bristol and found that people identified with one another and because of this they adhered to the norms of the group because they were adopted as their own. In conclusion, it seems that older theories such as Le Bon and Freud are relevant today as they provide a strong theoretical basis from which we can develop our own theories of the crowd. However, the very theoretical nature of them is what makes the more recent theories much viable and realistic as both Freud and Le Bon use concepts that we will never be able to verify such as the unconscious mind. In contrast, more recent studies are supported with empirical evidence that can lead to only one conclusion, they are better theories. The nature of crowds however, means that future research will be difficult to undertake, as studies cannot be recreated in the lab due to the sheer volume of people needed. ...read more.