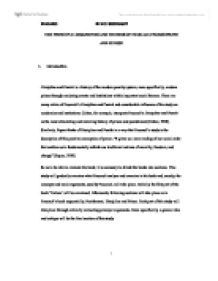 THE PRINCIPLE ARGUMENTS AND THEMES OF FOUCAULT'S DISCIPLINE AND PUNISH I. Introduction Discipline and Punish is a history of the modern penalty system, more specifically, modern prison through analyzing events and institutions within important social themes. There are many critics of Foucault's Discipline and Punish and considerable influence of his study on academics and institutions. Cohen, for example, interprets Foucault's Discipline and Punish as the most stimulating and revealing history of prison and punishment (Cohen, 1978). Similarly, Popen thinks of Discipline and Punish in a way that Foucault's study is the description of this positive conception of power; "It gives us a new reading of our social order that enables us to fundamentally rethink our traditional notions of morality, freedom, and change" (Popen, 1978) So as to be able to evaluate the book, it is necessary to divide the books into sections. This study will gradually examine what Foucault analyze and examine in his book and, mostly, the concepts and main arguments, used by Foucault, will take place. Initially, the first part of the book 'Torture' will be examined. Afterwards, following sections will take place as in Foucault's book sequentially, Punishment, Discipline and Prison. Each part of this study will take place through critically evaluating principal arguments. More specifically, a general idea and critique will be the final section of this study II. Torture Foucault begins by contrasting a public execution of Robert-Fran�ois Damiens who was convicted of regicide in 1757 to prison rules in 1837. This comparison portrays the movement between the public execution and the modern prison. ...read more.

Furthermore, Foucault, confidently, explains the success of disciplinary power through hierarchical observation, normalizing judgement, and their combination in a procedure, the examination (Ibid: 170). The concept of hierarchical observation signifies the connection between power and visibility through a gaze over subjugated bodies; normalizing judgement is associated with normalizing and inducing conformity, not to expiate or repress non-conformity by punishing (Smart, 1985); the examination refers to effectively combine the former two into a comprehensive system that renders individuals as both intelligible and susceptible to judgment (Milstein, 2001). > Panopticon Bentham's "Panopticon", for Foucault represents the way in which discipline and punishment works. For Garland, the "Panopticon" is the very epitome of power-knowledge principles; it is an architectural form, is designed as a circular building with individual cells around its perimeter whose windows and lighting were planned in order to make their occupants clearly visible, is also designed to render individuals constantly subject to the knowledge and power of the central authorities. It is a machine that sustains a power relation (1986). Similarly, Milstein argues that Foucault offers us the Panopticon as a technique that economizes the investment of power-knowledge relations on the body. Moreover, while the Panopticon is no doubt the most famous of Foucault's metaphors for power in modern societies, however it would not be true to assume that Foucault intended the Panopticon or the prison to be a metaphor for society as a whole (Milstein, 2001). "In place of exceptional power of the scaffold, we have the constant surveillance of the prison" Driver notes as Foucault's thought. ...read more.

In addition Foucault's work is not equally convincing on all analytical levels, it transcends traditional academic boundaries to provide a provocative examination of the relationship between prison and the mechanisms of social control in contemporary society (Shelly, 1979). In terms of what Foucault thinks about structure of discipline, for Clary, he fails to realize the tremendous power of freewill/choice, his entire pessimistic structure of discipline decays. Clary also adds that Foucault does not take into account the free choice of a prisoner to challenge the mechanisms of the prison system. (2005) In respect of modern penal practice and normalizing methods, according to Garland, in order to reinforce his approach to characterization of modern penal system Foucault uses no extensive or quantitative evidence. Furthermore, he insists on that since the beginning of the Carceral era, namely, for nearly 200 years, disciplinary characterization of modern penal system have been in place, however, "the spread of these normalizing methods only really took off in the early 20th century and that even now they have not yet succeeded in displacing other nondisciplinary sanctions from the central position in penal practice" (Garland, 1986). For Simon, even if Foucault's points were not wholly original, since Nietzsche had described the history of punishment long ago as a central place for creating obedient people, Discipline and Punish recast all the themes, mentioned about, amid brilliantly interpreted examples (1996). Popen, like Simon, states that Foucault follows the study of Nietzsche with Discipline and Punish; "The book announces a Nietzschean tropism in Foucault's thought and represents the transformation of the archaeological project into a "genealogical" enterprise" (1978). ...read more.