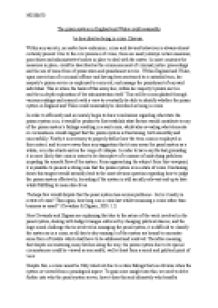 The prison system in England and Wales could reasonably be described as being in crisis. Discuss.

﻿N0338670 The prison system in England and Wales could reasonably be described as being in crisis. Discuss. Within any society, no matter how embryonic, crime and deviant behaviour is always almost certainly present. Due to the ever presence of crime, there are nearly always certain measures, procedures and administrative bodies in place to deal with the matter. In most countries the measures in place, could be described as the commencement of criminal justice proceedings and the use of some form of prosecution and punishment service. Within England and Wales, upon conviction of a criminal offence and having been sentenced to a custodial term, her majesty?s prison service is employed to carry out, and manage the punishment of any said individual. This is where the basis of this essay lies, within her majesty?s prison service and the in-depth exploration of the administration itself. This will be accomplished through various readings and research with a view to eventually be able to identify whether the prison system in England and Wales could reasonably be described as being in crisis. In order to efficiently and accurately begin to draw conclusions regarding what state the prison system is in, it would be prudent to first establish what factors would contribute to any of the prison system?s failings resulting in a said crisis, whilst also revealing what elements or circumstance would suggest that the prison system is functioning both smoothly and successfully. ...read more.

"Today the prison population reached 60,000. It is no coincidence that recorded crime has fallen by record amounts over the last four years at the same time that the prison population has risen.? (Michael Howard, 1993) The above quotation illustrates how the media can also be used to the prison systems advantage, rather than solely as a crises creating tool. Regarding any said crisis there may or may not be within HM?s prison service, there are a few mainstream theories regarding the issue which are freely available via many media platforms. The one I shall be discussing in this essay is known as the Orthodox account and is heavily described within Cavadino and Dignan?s work ?The Penal System: An Introduction.? ?This passage gives us almost all the components of the ?orthodox account? of the penal crisis, The crisis is seen as being located very specifically within the prison system- it is not seen as a crisis of the whole penal system, or of the criminal justice system, let alone as a crisis of society as a whole. The immediate cause of the crisis is seen as the combination of different types of difficult prisoners- what has been called the ?toxic mix? of prisoners (Home Office, 1984a:para 124) ...read more.

To summarise it is evident there are a whole variety of problems present within the prison service, but not throughout the whole of the penal system. Whether these factors can be classified as putting HM?s prison service in a state of crisis is highly debatable. This is due to the large amount of evidence of these crisis contributing factors within the system, but also the special nature that the system does. In such a conflict filled niche, there are bound to be complications regarding the efficient running of things. As explained before it is hard to say at what time period a crisis turns into everyday life. To conclude, it could be said that the points presented in this essay, such as the orthodox account, can make a very strong argument that the prison system in England and Wales, is in a state of crisis. Although key workings such as Cavadino and Dignan could argue otherwise, by suggesting the job the system does, although not a pretty sight and full of misdemeanours, eventually does fulfil its purpose. It is only from an inside penological view that the failings become more obvious. With this the prison service could be classified a social success, as its purpose of detaining dangerous criminals is certainly being fulfilled, and certainly not enduring a crisis. ...read more.