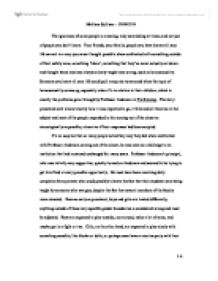 The problems gone through by Professor Anderson in Trailblazing. The story presented went almost exactly how it was expected to go, it followed all theories on the subject and most of the people responded to his coming out of the closet

The ignorance of some people is amazing, truly astonishing at times; and not just of people you don't know. Your friends, your family, people you have known all your life can act in a way you never thought possible when confronted with something outside of their safety zone, something 'taboo', something that they've never actually sat down and thought about and was always silently taught was wrong; such as homosexuality. Someone you know all your life could pull a surprise turnaround when the topic of homosexuality comes up, especially when it's in relation to their children, which is exactly the problems gone through by Professor Anderson in Trailblazing. The story presented went almost exactly how it was expected to go, it followed all theories on the subject and most of the people responded to his coming out of the closet as stereotypically as possible; almost as if their responses had been scripted. It's no surprise that so many people acted they way they did when confronted with Professor Anderson coming out of the closet, he was seen as a challenge to an institution that had remained unchanged for many years. ...read more.

However, I wasn't fitting the gender role I was supposed to, I was spending too much of my time reading outside or playing with the girls. So I was forced to join the wrestling team for the three years before I got a job. This is a very common practice, parents forcing their sons into sport, or talking their sons away from sports that aren't masculine enough, like cross-country running. My school never experienced the stigma against cross-country runners that Professor Anderson wrote about. The so-called 'cool kids', the social elite, were the ones who played cross-country. However, these kids were just as cruel as any of the other jocks, they didn't possess the understanding that Professor Anderson's athletes did, perhaps because they weren't outcasts themselves. Professor Anderson wrote that he ran cross-country to get out of PE, so he wouldn't have to change in the locker room with the other guys. Cross country is not exactly a hyper-masculinized sport, in many schools it's ostracized as being a sport for 'sissies'. However, simply playing a sport did net Professor Anderson some masculine 'currency' which he used to dispel queries into his sexuality. ...read more.

However, since he wasn't acting stereotypically people got extremely offended, afraid that simply by proxy their children would become gay; which is of course preposterous. Fausto-Sterling makes it rather clear that people don't just learn a sexual preference by watching it in others, at least not at such a young age. She makes the argument that sexual preference and gender are a combination of genetics and the environment one is raised in. However, by high school your gender and preference are both more or less set in stone, and there is little that will change either. Homosexuality is a very touchy subject in his country; many homophobes use a veil of religion to explain their own homophobic beliefs. In reality, it's more likely a sort of hetro-sexism. Much like sexism or racism, hetero-sexism consists of heterosexuals thinking their way of life is the only way. People like Professor Anderson helped to show the world that isn't true, that like Anne Fausto-Sterling repeatedly writes there are more than just two set genders for two sexes. There's an entire continuum of genders, ranging from gay to straight to asexist to any number of possibilities. The more people are exposed to gay culture, the more hetero-sexism will die down, and perhaps with that we'll see a decrease in the tie between masculinity and sport. ...read more.