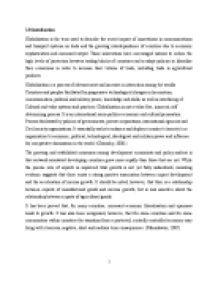 The process of globalization and its impact on agriculture in Africa.

﻿1.0 introduction Globalisation is the term used to describe the recent impact of innovations in communications and transport systems on trade and the growing interdependence of countries due to economic sophistication and increased output. These innovations have encouraged nations to reduce the high levels of protection between trading blocks of countries and to adopt policies to liberalise their economies in order to increase their volume of trade, including trade in agricultural products. Globalization is a process of advancement and increase in interaction among the worlds Countries and peoples facilitated by progressive technological changes in locomotion, communication, political and military power, knowledge and skills, as well as interfacing of Cultural and value systems and practices. Globalization is not a value-free, innocent, self determining process. It is an international socio-politico-economic and cultural permeation Process facilitated by policies of governments, private corporations, international agencies and Civil society organizations. It essentially seeks to enhance and deploy a country?s (society?s or organization?s) economic, political, technological, ideological and military power and influence for competitive domination in the world. (Chomsky, 2000.) The growing and established consensus among development economists and policy-makers is that outward-orientated developing countries grow more rapidly than those that are not. While the precise role of exports in improved total growth is not yet fully understood, mounting evidence suggests that there exists a strong positive association between export development and the acceleration of income growth. It should be noted, however, that their is a relationship between exports of manufactured goods and income growth, but is less assertive about the relationship between exports of agricultural goods. It has been proved that, for many countries, increased economic liberalisation and openness leads to growth. It has also been recognised, however, that for some countries and for some communities within countries the transition from a protected, centrally controlled economy may bring with it serious, negative, short and medium term consequences. (Mkandawire, 2005). ...read more.

The lack of market information has the effect of draining resources out of rural areas where most poor people live. It also means that farmers are unaware of the types and quality of produce being sought by national, regional and international customers which hinders the entire nation in its efforts to earn more from exports. The advent in recent years of mobile telephone systems and local FM radio stations now offers the opportunity to establish locally based MIS which can disseminate appropriate market information in the local language. 3.0 THE CHALLENGES Some actors in the agricultural sector have seen little benefit from the liberalisation process, however. Communities of small-scale, isolated farmers (which make up the majority of the population in many East African countries) find it more difficult to obtain inputs and credit. Extension services have been significantly reduced and the value of their surplus production has fallen. They are especially vulnerable to changes in production systems. The trend towards larger farms and plantations in the name of efficiency has marginalised many rural groups thus adding to the problem of unemployment, urbanisation and cultural disintegration. Whilst African farmers are being asked to open their markets to free trade, they face direct competition with subsidised exports, donated food and inputs, dumped food and inputs, monetised food aid, and yet they are also marginalised on the international market by tariffs, an increasing raft of Sanitary and Phytosanitary conditions, technical barriers to trade. Whereas, farmers in the EU and USA are enjoying the benefits of increased farm subsidies and reduced competition due to the effects of upgrading quality requirements for food products, which is preventing inflow from developing countries. The gap in value added between African and Asian farmers as opposed to the United States and Europe is not simply a difference in economic capability and output. Rural ways of life, which have evolved over the millennia in Africa, have been finely tuned to the local environment, social consensus and political balance. ...read more.