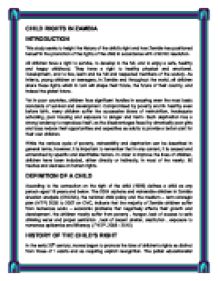 The Promotion of Children's Rights in Zambia.

CHILD RIGHTS IN ZAMBIA INTRODUCTION This study seeks to height the history of the child's right and how Zambia has positioned herself in the promotion of the rights of the child in accordance with UNCRC resolution. All children have a right to survive, to develop to the full, and to enjoy a safe, healthy and happy childhood. They have a right to healthy physical and emotional. Development, and to live, learn and be full and respected members of the society. As infants, young children or teenagers, in Zambia and throughout the world, all children share these rights which in turn will shape their future, the future of their country, and indeed the global future. Yet in poor countries, children face significant hurdles in securing even the most basic standards of survival and development. Compromised by poverty and ill- healthy even before birth, many children suffer the successive blows of malnutrition, inadequate schooling, poor housing and exposure to danger and harm. Such deprivation has a strong tendency to reproduce itself, as the disadvantages faced by chronically poor girls and boys reduce their opportunities and capacities as adults to provide a better start for their own children. While the various cycle of poverty, vulnerability and deprivation can be described in general terms, however, it is important to remember that in any context, it is caused and entrenched by specific and identifiable factors. In order to improve the lives of children, children have been included, either directly or indirectly, in most of the nearly. 80 treaties and decrees on human rights. DEFINITION OF A CHILD According to the convection on the right of the child (1989) defines a child as any person aged 18 years and below. The 2004 orphans and vulnerable children in Zambia situation analysis (OVCSA), the national child policy and the medium - term strategic plan (MTP) 2005 to 2007 on OVC, indicate that the majority of Zambia children suffer from numerous socio - economic problems that negatively affects their growth and development. ...read more.

indicated that it received information that the Zambian Human Rights Commission was severely understaffed and lacked the technical capacity needed to carry out effective investigation and inspection visits. The commission reported to have an enormous backlog of cases. World Organization Against Torture 2008 indicated that the commission is not in a position to take any further action once the recommendations are issued, especially in the case where a recommendation issued is not implemented by the "appropriate authority". Additionally, it further indicated that the commission is not competent to initiate legal proceedings on behalf of the complainants. The dependence by the commission on other authorities to take action does not give assurance to the complainant for redress. This procedure also unduly prolongs the proceedings. According to Child's Rights Organizations (2008) stated that the children's Rights committee within the commission, created to strengthen the convention monitoring and implementation of the convention on the Rights of the Child, has not performed according to expectations due to inadequate resources. Child Rights Organizations reported however, that there is a new process to strengthen the independent monitoring of children's rights under the commission through the establishment of the commissioner for children. Child Rights Organizations recommended the Government to progressive scale up the human and financial resources to the commission to promote the establishment of institutions such as the office of the commissioner for children vested with the relevant power and authority to effectively protect children and to uphold their rights. iv. Policy Measures According component report for the situation analysis of children and women in Zambia (2008) apart from the Ministry of Education mainstreaming the teaching of human rights and specifically children's rights in the high school civic Education curriculum, Child Rights Organizations noted that there is still no effort by the Government to undertake systematic awareness training of professional groups, children, parents and the general public on the convention on the Rights of the child and the rights- based approach. ...read more.

In Zambia, unacceptable number of children die. About 20% of children born in Zambia do not live past their fifth birthday, while 10% of children die before they reach their first birthday. Close to 1% of the women who are pregnant in any given year will die in child birth, with a life time risk that 1 in 16 of all women will die resulting from maternal health problems. Adult mortality is also high. The leading causes death in Zambia is AIDS (1, 236/ 100, 000), respiratory infections in children, malaria, diarrheal diseases and T.B. while both under- 5 and infant mortality rates have fallen in recent years, estimates suggest that Zambia ranks 176th out of 189 countries in the world reporting figures on infant and child mortality. (CSO reports: 1980, 1990, 1991, 1992) Component report for the situation analysis of children and women in Zambia (2008) reveals that the quality of services in partly determined by staff- numbers, qualifications and experience. Government recognizes that staffing levels in the health sector are low: the number of available staff in 2005 was less than 50% of the recommended establishment, in spite of recent growth in per capita expenditure on health care since 2000. Concerned efforts have made to develop a long term strategy to train and retain health service staff. Resource allocations to the health sector are not based on deprivation and health status, and urban centers receive nearly twice that of rural provinces. The poorest, most remote and least urbanized districts and provinces receive the lowest per capita allocation, restricting health outcomes for children and women living in rural areas.(component report for the situation analysis of children and women in Zambia, 2008) CONCLUSION It is clear from the foregoing that Zambia has promoted the rights of the child in accordance with UNCRC Resolution through numerous sectors. Among the sectors are scope of international obligations, constitutional and legislative framework, institutional and human rights infrastructure and policy measures. It further highlights the promotion and protection of children's rights through Education, water and sanitation, Health e.t. ...read more.