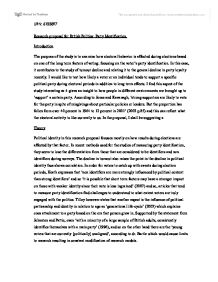 The purpose of the study is to examine how electoral behavior is affected during elections based on one of the long term factors of voting: focusing on the voters party identification. In this case, it contributes to the study of turnout decline and re

Research proposal for British Politics: Party Identification. Introduction The purpose of the study is to examine how electoral behavior is affected during elections based on one of the long term factors of voting: focusing on the voter's party identification. In this case, it contributes to the study of turnout decline and relating it to the general decline in party loyalty recently. I would like to test how likely a voter or an individual tends to support a specific political party during electoral periods in addition to long term effects. I find this aspect of the study interesting as it gives an insight to how people in different environments are brought up to 'support' a certain party. According to Jones and Kavanagh, 'strong supporters are likely to vote for the party in spite of misgivings about particular policies or leaders. But the proportion has fallen from over 40 percent in 1964 to 12 percent in 2001' (2003 p.85) and this can reflect what the electoral activity is like currently to us. ...read more.

Data will hopefully be able to help us in understanding and perceiving the steadiness of a political support among voters along with information on how long they tend to keep up with the support. Methodology: As for a methodology, I believe in order to get clear reliable statistical results, the most suitable and appropriate way to measure one's party identification is during the period of national elections through surveys that could be done with the cooperation of the BES. Surveys will be done through asking brief questions in three different phases- one that is three months before the elections to see if there was a specific preference; two, during the elections to also grasp the idea of non-identifiers, three, after three months of the election results to study any changes in opinions. Asking participants will have to be through email, telephone and/or by person. Anyone who is registered to vote would be contacted in order to get the maximum number of participation and a reliable valid result for the data that will be collected. ...read more.

How much are you likely to go and vote during the next election period? (0-not at all, 5-very strong) 0 1 2 3 4 5 2. Will you vote for the same party as you did last time? Yes/No/I do not know) 3. Do you have occasional doubts about the party that you support? (Yes/No) In order to calculate the data, we have to use a sophisticated statistical formula. Instruments that are recommended for usage: would have to be a i.e IBM's SPSS product software with the help and guidance of the BES for guidance thus a computer is a necessity and so is a telephone. In conclusion, due to the fact that elections occur in specific period of times, it needs thorough research. I estimate for the survey to take around 6-8 months to be completed and hopefully with previous studies, the questions and answers could be looked into and also be studied in order to provide additional data that could be very useful. Party identification should always be an important dynamic in electoral behavior as it has always been sociologically and psychologically present as it revolves around based on the environment people are place in. ...read more.