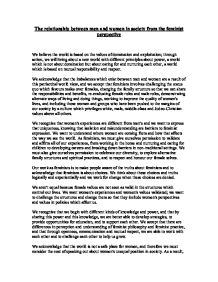 The relationship between men and women in society from the feminist perspective.

The relationship between men and women in society from the feminist perspective We believe the world is based on the values of domination and exploitation; through action, we will bring about a new world with different principles about power, a world which is not about domination but about caring for and nurturing each other, a world which is based on mutual responsibility and respect. We acknowledge that the imbalances which exist between men and women are a result of this patriarchal world view, and we accept that feminism involves challenging the status quo which favours males over females, changing the family structure so that we can share the responsibilities and benefits, re-evaluating female roles and male roles, demonstrating alternate ways of living and doing things, working to improve the quality of women's lives, ...read more.

Our work as feminists is to make people aware of the truths about feminism and to acknowledge that feminism is about choices. We think about these choices and truths logically and experientially and we work for change when these choices are denied. We aren't equal because female values are not seen as valid in the structures which control our lives. We want women's experiences and women's values validated; we want to challenge the structures and change them so that they include women's perspectives and values in policies which affect us. We recognize that we begin with different kinds of knowledge and power, and that by sharing this power and this knowledge, we are better able to develop strategies, to provide opportunities for education, and to support each other. ...read more.

At the same time though, we know there are times when women have to be brave and stick their necks out; to take pride in their feminist belief and assert it publicly; to be a role model and identify oneself as a feminist. We must also confront the violence in our own lives -- the violence implicit in racism, homophobia and sexism, not just physical violence. We recognize that even though there are issues which divide us, some of which centre around sexuality (such as abortion and homosexuality), we do not accept the further marginalization of women with whom we disagree. At the same time we accept our responsibility to learn about those issues and to talk about them; we have to make a space in which it is safe to talk about our disagreements. ...read more.