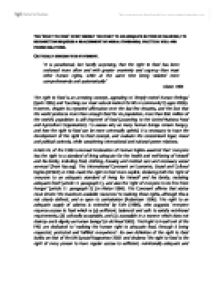 The Right to Food

The ‘right to food’ is not merely the right to an adequate ration of calories; its recognition requires a realignment of moral standards, political will and power relations.

‘It is paradoxical, but hardly surprising, that the right to food has been endorsed more often and with greater unanimity and urgency than most other human rights, while at the same time being violated more comprehensively and systematically’

The right to food is an arresting concept, appealing to ‘deeply-rooted human feelings’ (Spitz 1985) and ‘touching our most natural instinct for life in community’ (Lappe 2006). However, despite its repeated affirmation over the last few decades, and the fact that the world produces more than enough food for its population, more than 850 million of the world’s population is still deprived of food (according to the United Nations Food and Agriculture Organization). To assess why so many human beings remain hungry, and how the right to food can be more universally upheld, it is necessary to trace the development of the right to food concept, and evaluate the concomitant legal, moral and political contexts, while considering international and national power relations.

Article 25 of the 1948 Universal Declaration of Human Rights asserted that ‘everyone has the right to a standard of living adequate for the health and well-being of himself and his family, including food, clothing, housing and medical care and necessary social services’ (from fao.org). The International Covenant on Economic, Social and Cultural Rights (CESCR) in 1966 made the right to food more explicit, declaring both the ‘right of everyone to an adequate standard of living for himself and his family, including adequate food’ (article 11 paragraph 1), and also the ‘right of everyone to be free from hunger’ (article 11 paragraph 2) (in Alston 1984). The Covenant affirms that states must devote ‘the maximum available resources’ to realizing these rights, although this is not clearly defined, and is open to contestation (Robertson 1996). The right to an adequate supply of calories is extended by Eide (1989), who suggests ‘everyone requires access to food which is (a) sufficient, balanced and safe to satisfy nutritional requirements, (b) culturally acceptable, and (c) accessible in a manner which does not destroy one’s dignity as human beings’ (in de Waal 2002). The Right to Food Unit of the FAO are dedicated to ‘realizing the human right to adequate food, through it being respected, protected and fulfilled everywhere’. Its own definition of the right to food builds on that of the UN Special Rapporteur 2002 and declares ‘the right to food is the right of every person to have regular access to sufficient, nutritionally adequate and culturally acceptable food for an active, healthy life. It is the right to feed oneself in dignity, rather than the right to be fed’ (fao.org). The FAO describes the four pillars of food security as availability, stability of supply, access and utilization, and from 2004 have developed Voluntary Guidelines that aim to effect these.  By 2006 22 countries had included the right to food in their constitutions, either for all citizens or for children (Lappe 2006), but this is evidently not sufficient to adequately provide for the world’s hungry. Not all relevant meetings have followed up the right; the 1993 United Nations Conference on Human Rights made no mention of the right to food (Tomasevski 1994 in de Waal 2002).

Dreze and Sen (1989) exclaim that ‘when millions of people die in a famine, it is hard to avoid the thought that something terribly criminal is going on’, raising philosophical questions concerning moral standards about the right to food. No one can be anything but ‘against’ famine (de Waal 2005), but the abstract sinister nouns of ‘famine’, ‘starvation’ and ‘hunger’ cannot shoulder the blame for the starving poor. Assuming that the hungry have a moral right to food suggests that someone has the moral duty to provide that food, although the insistence on this responsibility seems to have been notably absent in recent times (Sen 1984). In the past, it was relatively easy to identify those responsible for malnourishment or undernourishment, as agriculture was directly taxed. Today however, indirect taxation, relative prices, inflation and terms of trade confuse and diffuse the blame (Spitz 1985). Any realignment of moral standards must occur within those organisations that should be dutifully enforcing the right to food, although the fact that these are hard to identify specifically problematizes this ethical affirmation.  In any case, there exists a danger that too heavy a focus on the morality of hunger could limit political action; as de Waal (2005) notes, ‘it is easy for moral judgements to cloud critical thought’. A realignment of moral standards may not therefore be as useful as a shift in power relations for the right to food to be more universally fulfilled.

The power relations involved in, and perpetuated by, international humanitarian offerings of food aid complicate the notion of a right to food. Alston (1984) argues that the result of food aid, if not the objective, is to reinforce the dependence of the poor on local power structures and external assistance, potentially strengthening oppression. Although the poor in such situations may be provided for in terms of calories, they are not themselves exercising their right to food: that ‘right’ is presented to them (sometimes literally) on a plate. De Waal (2002) claims that the humanitarian international ‘is avowedly dedicated to fighting famine, but does not in fact operate in a way that enables this to be achieved’. In some cases, as in the 1984/85 Darfur famine, food aid may well fail in its own terms (not reaching the right people at the right time, denying food to some of those who need it most), as well as being an inappropriate form of assistance (according to de Waal 2005). De Waal (2005) warns that ‘problems will not be solved by liberal helpings of enthusiasm, goodwill and free sorghum’. Similarly, Robertson (1996) argues that ‘simply throwing resources at the problem of malnutrition will not cure it’. To fully enable the right to food, the needs of the hungry have to become politicised; ‘history shows that humanitarian assistance cannot fill the vacuum of effective political engagement’ (Duffield et al 2001).

The current international power structure further restricts the local politicization of the right to food. The modern, Anglo- and techno-centric episteme has caused famine and hunger to be naturalized ‘as part of a scientific framework: [they are] seen as object[s] of investigation and resolution by calculation and technology, rather than the subject of political debate and contestation’ (Edkins 2000). Similar laments are made by de Waal (2002 and 2005) and Alston (1984), suggesting that a realignment of the internationally reinforced discourse of hunger (and its associated power relations) is necessary if the right to food is to be addressed from political as well as technical angles.

Realigning power struggles at smaller scales is also crucial to recognise the right to food. Sen’s (1981) entitlement theory, superseding the Food Availability Decline (FAD) notion, states that ‘starvation is the characteristic of not having enough food to eat. It is not the characteristics of there not being enough food to eat’. The right to food therefore depends on a person’s ability to command food, through direct (production) or indirect (exchange and inheritance) entitlements (Sen 1981). In reality, ‘many factors interact to determine who gets what, when, and how much food, and how well the foods obtained are utilized’ (Florencio 1996), as different groups have differing land rights and bargaining power.

In practical terms, positive political will and power changes are needed to bring about, inter alia, national land use reform, security of tenure, fairer share-cropping systems and equitable allocation of fishing rights (Spitz 1985). The FAO Director General Jacques Diouf, speaking on World Food Day this week, insisted that while ‘national commitments to implement the right to food would have been unthinkable only ten years ago, such commitments are already bearing fruit. In Brazil, for example, the right is now firmly entrenched and hunger is in retreat’ (allafrica.com). It is in other parts of the world, particularly sub-Saharan Africa, that political will and power relations must be realigned if the dignified right to adequate food is to be universally recognised.

Arendt, Hannah 1976 “Decline of the Nation-State and the Ends of the Rights of Man.” The Origins of Totalitarianism. New York: Harcourt: 267-302.

Sen, Amartya 1984 "The Right Not to be Hungry."  The Right to Food. Ed. K. Tomaševski and P. Alston. Dordrecht: Martinus Nijoff Publishers