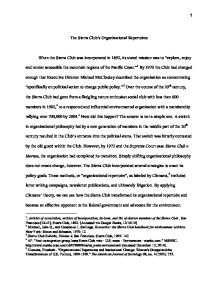 The Sierra Clubs Organizational Repertoires. Over the course of the 20th century, the Sierra Club had gone from a fledgling nature enthusiast social club with less than 600 members in 1902,[3] to a respected and influential environmental organiza

The Sierra Club's Organizational Repertoires When the Sierra Club was incorporated in 1892, its stated mission was to "explore, enjoy and render accessible the mountain regions of the Pacific Coast."1 By 1970 the Club had changed enough that Executive Director Michael McCloskey described the organization as concentrating "specifically on political action to change public policy."2 Over the course of the 20th century, the Sierra Club had gone from a fledgling nature enthusiast social club with less than 600 members in 1902,3 to a respected and influential environmental organization with a membership tallying over 700,000 by 2004.4 How did this happen? The answer is not a simple one. A switch in organizational philosophy led by a new generation of members in the middle part of the 20th century resulted in the Club's entrance into the political arena. That switch was bitterly contested by the old guard within the Club. However, by 1972 and the Supreme Court case Sierra Club v. Morton, the organization had completed its transition. Simply shifting organizational philosophy does not create change, however. The Sierra Club incorporated several strategies to enact its policy goals. These methods, or "organizational repertoire", as labeled by Clemens,5 included letter writing campaigns, newsletter publications, and ultimately litigation. By applying Clemens' theory, we can see how the Sierra Club transformed its organizational repertoire and became an effective opponent to the federal government and advocate for the environment. In Elisabeth Clemens' 1993 article on what she terms "organizational repertoires", Clemens attempts to explain how social movement groups create institutional change. According to Clemens, the dominant theoretical models discount social movements as futile. Robert Michels' "iron law of oligarchy" states that all organizations will eventually be ruled by a small of group of leaders, obliterating the democratic intentions of that group, and distancing the organization from its "initial commitment to the transformation of the political system."6 Thus the organization does not create real change, because its leaders are so far removed from the goals which they set out to enact. ...read more.

Essentially, the Club was a "friendly lobby" for the Forest Service to "defend their own prerogatives with."40 The Forest Service wasn't really "using" the Club, because the arrangement was mutually beneficial. While the government got third-party support, the Club achieved increased legitimacy before Congress and the President. The connections and status gained while dealing with the Forest Service would later benefit the Club as it began "supporting and supplementing the policy" of the newly created National Park Service in the 1920s.41 No serious confrontations took place in the period between Hetch Hetchy and the end of the Second World War. The Club's political actions at this time against reflect Clemens' assertion concerning cultural norms. As Morag-Levine writes, concerning the Sierra Club in the early 20th century: [The strategy was] very much in keeping with the era's conception of conservationist organizations as consultant to the government on how to balance development and conservation.42 Without much confrontation or major issues for the Club to devote itself to politically, the organization concentrated more on recreational pursuits.43 This would not last, however. By the century's halfway point, the Sierra Club would again find itself in the middle of battles with the government. Increased political involvement came under the leadership of David Brower, the Club's next great leader. Brower was appointed the Club's first executive director in 1952, a paid position that marked the group's transformation into a modern, "professionally staffed organization."44 Brower had been appointed the editor of the Sierra Club Bulletin in 1946 and immediately started a shift in the Club's focus, moving away from the "hiking and recreation" that dominated the 1930s and 40s and towards "a greater attention to wilderness protection."45 Brower's first test came in 1950, when the United States Bureau of Reclamation announced plans to build a dam on the Green River in Dinosaur National Monument, Utah.46 The dam was to be for hydroelectric power. ...read more.

This continued a long history of internal maneuverings due to conflicts of ideologies. The Defense Fund would eventually change its name to "EarthJustice" in 1997, although it still litigates extensively for the Sierra Club. The Sierra Club of the late 19th century is very different from the Club of today. The group was founded to protect national parks and to encourage the enjoyment of nature. Today, it is a major player in Washington, having branched out nationally and spread its influence across the country. John Muir founded the Sierra Club to protect and preserve nature's beauty, and although he would have been hard pressed to foresee the Club's current form, it is safe to say he would have supported their switch to a more confrontational, rather than deferential, style when dealing with the government. Muir had fought hard and lost the battle for Hetch Hetchy in pursuing that political activist philosophy. The longevity and relevance of Muir's Club is impressive. To see how the Club has been able to stay viable for so long, we have applied Clemens' theory of organizational repertoire. The Club started its environmental repertoire with a deferential advisee relationship to the federal environmental agencies, which relied on insider and personal connections to enact social change. Before long, they took a more active stance, presenting witnesses in front of Congress and managing public opinion using various forms of media. Finally, the Club started utilizing litigation as an instrument to achieve its policy goals. Litigation is now one of the Sierra Club's most relied-on avenues. Many of the Club's strategies were adapted based on the cultural norms of the times, or else appropriated from another organization's repertoire. Throughout this evolution, there was dissent in the Club, from more conservative factions who disapproved of political involvement. This internal strife was good, however. It kept the Club from become vapid and succumbing to the "iron law of oligarchy." The Sierra Club has held sway over environmental issues for more than a century, and figures to maintain its influence in the future by consistently adapting its organizational repertoire. ...read more.