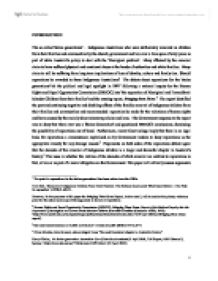 The so-called 'stolen generations' - Indigenous Australians who were deliberately removed as children from their families and communities by the church, government and law - White Austrailia's policy to deal with the 'aboriginal problem'.

INTRODUCTION The so-called 'stolen generations' - Indigenous Australians who were deliberately removed as children from their families and communities by the church, government and law over a time span of sixty years as part of white Australia's policy to deal with the 'Aboriginal problem'. Many affected by the removal claim to have suffered physical and emotional abuse at the hands of authorities and white families. Many claim to still be suffering from long term implications of loss of identity, culture and family ties. Should reparations be awarded to these Indigenous Australians? The debate about reparations for the 'stolen generations' hit the political and legal spotlight in 19971 following a national inquiry by the Human Rights and Equal Opportunity Commission (HREOC) into 'the separation of Aboriginal and Torres Strait Islander Children from their families' and the ensuing report, Bringing them Home.2 The report identified the past and continuing negative and disabling effects of the forcible removal of Indigenous children from their families and communities and recommended reparation be made for the violations of human rights and harm caused by the racially discriminatory policies and laws. The Government response to the report was to deny that there ever was a 'Stolen Generation' and questioned HREOC's conclusions, dismissing the possibility of reparations out of hand. Furthermore, recent Court rulings imply that there is no legal basis for reparations a circumstance capitalised on by Government leaders to deny reparations as the appropriate remedy for any damage caused.3 Proponents on both sides of the reparations debate agree that the decades of the removal of Indigenous children is a tragic and shameful chapter in Australia's history.4 The issue is whether the victims of the decades of child removal are entitled to reparations in fact, at law or as part of a moral obligation on the Government. This paper will critically assess arguments for and against reparations for the so-called 'stolen generations' in the context of the debate on whether or not the child removal policies constituted 'genocide'. ...read more.

It is argued that assimilation entailed provision of opportunity, without force or coercion for the integration of indigenous people into the nation. Children were removed either with parental consent to provide education and health care or because they were neglected. It is argued that many children were mistreated in Indigenous communities because they were illegitimate or because they were of mixed race.30 The Government has capitalised on Court decisions as supporting its view that past removal practices were not genocidal and that the Commonwealth is therefore absolved of any responsibility to provide reparation. The Commonwealth Government has relied on the decisions in the Kruger v Commonwealth31 that the relevant Northern Territory ordinance under which the Indigenous plaintiffs were removed as children did not authorise genocide as authority that the Commonwealth was not guilty of genocide. More recently it has relied on the Federal Court ruling in Cubillo and Gunner v Commonwealth32 against awarding compensation to two members of the so-called 'stolen generations'. In Cubillo O'Loughlin J found against the plaintiffs' claims that their removal was pursuant to a 'blanket' policy of removing all 'half-castes' for the unlawful purposes of: destruction of family and cultural associations, assimilation into white society, provision of domestic and manual labour for Europeans and a desire to 'breed out "half-castes" and protect the primacy of the Anglo-Saxon community children'.33 The decision directly contradicts the findings in the Bringing Them Home Report and supports the argument that the policy of removal pursuant to child welfare laws was benign in intent. CRITICAL ASSESSMENT: The Bringing Them Home Report's finding of genocide is problematic because of its failure to adequately distinguish between the variety of circumstances under which Indigenous children were removed implying that all Indigenous children were removed with the genocidal intent to destroy Indigenous races and culture. The methodology of the report has been criticised for failing to make a factual representation of the removal policies in order to make the worst possible case against Australia.34 The report is notably one-sided, ...read more.