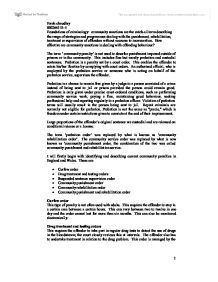 The term ' community penalty' is not used to describe punishment imposed outside of prisons or in the community. This includes fine but mostly probation and custodial sentences. Probation is a penalty set by a court order. This enables the offender to retain his/her liberties by complying with court orders. An authorised official, who is employed by the probation service or someone who is acting on behalf of the probation service, supervises the offender. Probation is a chance to remain free given by a judge to a person convicted of a crime instead of being sent to jail or prison provided the person could remain good. Probation is only given under precise court-ordered conditions, such as performing community service work, paying a fine, maintaining good behaviour, seeking professional help and reporting regularly to a probation officer. Violation of probation terms will usually result in the person being sent to jail. Repeat criminals are normally not eligible for probation. Probation is not the same as "parole," which is freedom under certain restrictions given to convicts at the end of their imprisonment. Large proportions of the offender's original sentence are custodial and are released on conditional release or a license. The term 'probation order' was replaced by what is known as 'community rehabilitation order'. The community service order was replaced by what is now known as 'community punishment order, the combination of the two was called community punishment and rehabilitation service. ...read more.

The order is seen as an effective method then imprisonment. The community rehabilitation order is less of a punishment order and more of a helping hand to get back on track. The offender is supervised by a probation officer who creates an action plan for the offender, if the offender fails to take a keen interest in it or fails to attend a meeting with the officer then he or she can alert the court who will re-sentence. It offers a push towards getting a job, which is seen as very helpful for the rehabilitation of offenders. Other orders include a blend of the previously mentioned orders this is seen as the best of both orders providing punishment and then offering rehabilitation. Other orders include a tagging order this essentially puts the offender under house arrest during certain times during the day this in hypothesis keeps the offender from re-offending however there is no counselling or pressure to enter the labour market. The court may also demand a fine be paid in order to "pay back" for the criminal offence committed but this is virtually a bad practice as the offender may have to find a substantial amount of money and therefore may route to offending again in order to get the required money. In general community punishment seeks to punish and rehabilitate offenders without involving imprisonment. I think that an if an average teenager was given community punishment it will be rather embarrassing, as it will possibly damage his or her "street" image, on the ...read more.

42 per cent of first time offenders and one-fifth of reconvictions are offenders aged between 18 to 20. 63 percent of this age group had a problem of numeracy and literacy and were unemployed. In conclusion, it is not easy to say weather community penalties the most effective source of punishment without sending an offender to prison, as I believe it mostly if not entirely depends on the background and readiness of the offender. I strongly believe that community sanctions have come along way and are an extremely successful process. It involves the offender being shamed in front of the community and peers and then paying back the community and then later seeking professional help to better themselves and not to re-offend. I prefer this method of punishment to imprisonment as the offender is locked up and kept under lock and key away from the victims of crime, who are not able to see their regret and sorrow, that's only if they feel remorse. Also as mentioned earlier it give the offenders chance to interact with other criminals, possibly more dangerous then themselves. This does not educate the offenders and fails to reintegrate the offenders back into society. However, if the offenders were for example, murderers then the time in prison is hugky compulsory and a community sanctions are not acceptable. It would be beneficial after the time in prison that the offender is given a community sanction, which is also a good way to re-educated and reintegrate the offender. ...read more.