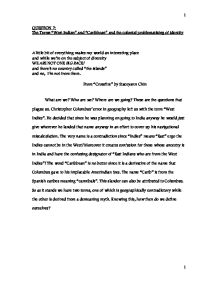 The Terms &quot;West Indian&quot; and &quot;Caribbean&quot; and the colonial problematizing of identity.

QUESTION 7: The Terms "West Indian" and "Caribbean" and the colonial problematizing of identity A little bit of everything makes my world an interesting place and while we're on the subject of diversity WE ARE NOT ONE BIG RACE! and there's no country called "the islands" and no, I'm not from there. From "Crossfire" by Staceyann Chin What are we? Who are we? Where are we going? These are the questions that plague us. Christopher Columbus' error in geography left us with the term "West Indies". He decided that since he was planning on going to India anyway he would just give wherever he landed that name anyway in an effort to cover up his navigational miscalculation. The very name is a contradiction since "Indies" means "East" ergo the Indies cannot be in the West! Moreover it creates confusion for those whose ancestry is in India and have the confusing designator of "East Indians who are from the West Indies"! The word "Caribbean" is no better since it is a derivative of the name that Columbus gave to his implacable Amerindian foes. The name "Carib" is from the Spanish caribes meaning "cannibals". This slander can also be attributed to Columbus. So as it stands we have two terms, one of which is geographically contradictory while the other is derived from a demeaning myth. Knowing this, how then do we define ourselves? ...read more.

The terms "West Indian" and "Caribbean" are ultimately found wanting since they assume the form of hegemonic cultural claims that works to omit or marginalize some communities. "Identities are potentially dangerous constructs and can be manipulated for oppressive ends."2 There are no common denominators in the Caribbean which simplify the classification process. As Richardson notes, "Regionality as expressed by regional characteristics in the Caribbean is an abstraction...imported and local geographical variables have combined so that it is in reality a regional mosaic of subtle complexity and incredible variety; regularities identified in one regional locale - to the chagrin of those who seek broad regional generalizations - are often absent in the next."3 Because the terms are so political the inhabitants of the region are ambivalent in their acceptance of a definition imposed from without. Central Americans tend to identify themselves as belonging to "the Isthmus" and refer to their Eastern Coast as "the Atlantic" while in the Hispanic islands, identification is with Latin America on linguistic, cultural and historical grounds. The term "Caribbean" is problematic insofar as it denotes the denial of their Hispanic identity. It also meant being grouped with non-Hispanic islands which were still under colonial rule and overwhelmingly African. As Puerto Rican writer Julio Rodriguez states, "For Puerto Ricans the term antillean has a clear significance but not the terms Caribbean or Caribbeanness. ...read more.

Personally I do not see a way of collectively re-naming the Caribbean. Any attempt to assign a single title to the many people is to deny the complexity inherent in the region and the validity of the diverse ethnic links and "concedes humanity, a past, a particularity and a pride only to one particular group".7 Obviously the name "West Indian" is pass� and should no longer be used if only because it is so misguided so as to be laughable. The roots of the Caribbean are in miscegenation - both racial and cultural. We have a way of life that embraces yet divides and fragments. With such a schizophrenic image we can only attempt to engender mutual respect and acceptance of all the cultures which are housed within our countries. Admittedly the assignment of the name "Caribbean" and the connotations that is carries is burdensome but we have little choice now. We must construct our identity as a positive one, beyond any imperialist labels arbitrarily chosen and claim our place in the world. 1 Norman Girvan, Caribseek Kaleidoscope E-zine, June 4th 2002 2 Edward Said, "East Isn't East", Times Literary Supplement, February 1995, pg.3 3 B.C.Richardson, The Caribbean in the Wider World 1492-1992, Cambridge University Press, 1992, pg.4 4 Norman Givran, Reinterpreting the Caribbean, http://www.acs-aec.org/rei1.htm 5 Norman Givran, Reinterpreting the Caribbean, http://www.acs-aec.org/rei1.htm 6 D.Walcott, The Antilles: Fragments of An Epic Memory (New York: Farrar, Straus and Giroux, 1992), pg.5 7 V.S. Naipaul, http://www.guyanaunderseige.com 1 1 ...read more.