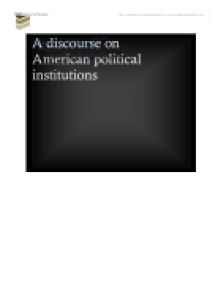 The title question of this paper asks that we evaluate the degrees to which the main US political institutions are democratic. However it would be amiss to not begin here by saying that to best understand the institutions of the US, we must look at the do

In late Autumn of 2000, the world watched wide eyed as a drama unfolded in Florida, a somber saga that had repeated itself three times already in the political history of the United States. The Presidency of America had been won by a candidate with less of the popular vote than his rival had received.1 Six weeks and a highly circumspect Supreme Court decision later, Americans were left to ponder how democratic their country's political institutions really were. Many would lament, and bemoan that this is not what the Founding Fathers had foreseen for America. Yet, precisely what had the framers of the constitution envisaged for their fledgling nation? For was it not them who created the system of the Electoral College, resulting more than 200 years later in the sham of an election that led to George W. Bush being elected President.2 Did they not realize that the system they espoused was inherently undemocratic and would undoubtedly lead to an executive holding office who was not the first choice of a majority of the public? The title question of this paper asks that we evaluate the degrees to which the main US political institutions are democratic. However it would be amiss to not begin here by saying that to best understand the institutions of the US, we must look at the document that shaped them, the constitution,3 and therefore also evaluate its democratic credentials. Furthermore in this essay will be presented a thorough examination of the three political institutions of the United States which together form the separation of power doctrine - that is, the legislature, the executive and the judiciary - ...read more.

This would be true but for the fact that any piece of legislation must pass through both houses. This means that if in a conflict of smaller versus larger states, the Senate has the majority to pass a bill, the House majority may inadvertently reject it, or at least filibuster it. Another feature of Congress which has frequently been debated is the 'Incumbency Factor'.13 This occurs when the incumbent senator or representative seeks re-election to their respective chamber and thus has significant funding and name recognition benefits over his rival, who may be unknown and less well funded. From 1952 to 1992, an average of more than 92 percent of House incumbents and 80 percent of Senate incumbents who sought reelection were successful, many relying on 'pork-barrel legislation'.14 Such a situation hardly creates a level playing field necessary for democracy to flourish. Polling has shown that confidence in Congress is steadily declining with rises only at times of crisis due to the 'Patriot Factor', (see Graph I).15 We can see from these studies that although most Americans still believe that in principle Congress upholds the basic values of democracy, they are unsure as to whether the opposition on Capitol Hill is a strong and active one. Furthermore, the drafting and passing of bills through both houses has often been criticized by democrats as being an arduous, complicated and unnecessary task.16 Scholars have pointed out that although this is not inherently undemocratic; the amount of badly needed public legislation being either filibustered or voted down by congresspersons who have close connections to lobbyist interests does indeed go against the concept of equal political representation.17 The ...read more.

I mean, of course, those towering behemoths that are the Republican and Democratic parties. Few would deny that these two parties have, over the past seventy years had a monopoly on American politics, making it very difficult for any third party to gain any major ground amongst the electorate. This very monopoly is a topic of contention in the United States.25 Proponents of liberal democracy would unanimously point out that only a multi-party system would be most beneficial for democracy, however the two party system that has been a prevalent feature in the US, is troubling to democrats.26 A two party system does not afford much choice for the voter, and thus can be said to inevitably harm democracy. Conclusion -Elections, a democracy doth make not- In the introduction to this paper I referred to democracy as a never ending journey as opposed to a destination. As we have seen throughout the above arguments, this statement still holds true. The framers of the US constitution did not agree on many important issues which were then left to coming generations. America has a mixed record of tackling these challenges and this shows a divided nation. Democracy is on the lips of all, yet trying times often bring about undemocratic reforms. The political institutions have reflected this best of all, where a great struggle between different visions of democracy has, and is still, being fought. As to the question asked at the beginning of this work, we may conclude that the political institutions of the USA are on the path to democracy, yet they are still very far from being democratic. ...read more.