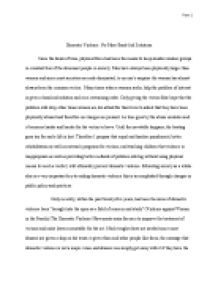 The ultimate goal in the fight against domestic violence should be to provide the ground work to stop the abuse before it begins.

﻿Font Domestic Violence: No More Band-Aid Solutions Since the dawn of time, physical force has been the means to keep smaller weaker groups in constant fear of the dominant people in society. Men have always been physically larger than women and since most societies are male dominated, to no one?s surprise the woman has almost always been the common victim. Many times when a woman seeks, help the problem of interest is given a band-aid solution such as a restraining order. Only giving the victim false hope that the problem will stop, other times women are too afraid for their lives to admit that they have been physically abused and therefore no charges are pressed. As time goes by the abuse escalates and it becomes harder and harder for the victim to leave. Until the inevitable happens; the beating goes too far and a life is lost. Therefore I propose that equal and harsher punishment, better rehabilitation as well as outreach programs for victims, and teaching children that violence is inappropriate as well as providing better methods of problem solving without using physical means to reach a verdict, will ultimately prevent domestic violence. ...read more.

in no way shape or form this is their fault, it would be best to give everyone a crash course in how to deal with domestic violence. Evidence suggests that ?many battered women are actually more comfortable talking with co-workers, friends, and or family members about the violence in their lives than with trained domestic violence professionals whom they do not know.? (Glazer) Many authorities insist that domestic violence has had a severe check but a Mercury News investigation shows that ?many batterers spend little time in jail and are shuffled through a criminal justice system that lacks the resources to keep victims safe. Batterers that are convicted are not always put in jail and usually violate their restraining orders.? (Uniform Crime Reports) A restraining order is no more than a piece of paper; it isn?t a shield or a bullet proof vest, it is a piece of paper. So why give victims false hope that a piece of paper will save them and not the judicial system. ...read more.

Our media and entertainment industry denounce the gravity of domestic violence. Children grow up to reflect what they see; what they were brought up on. Subconsciously they are gathering information in their brain shaping who they are as a character. Since judges continue to give little or no punishment to famous rap stars, of BMX athletes. Children slowly understand that it?s ok to do bad things if you?re rich or famous, and that there is always a loop hole in any law. The ultimate goal in the fight against domestic violence should be to provide the ground work to stop the abuse before it begins. By changing the way the media chooses to cover a story. By making the crime actually punishable to everyone instead of just a select few; by teaching children at an early age that it is wrong, and it is indeed a crime. Domestic violence will soon become a thing of the past. Too long the weaker group has been forced into the darkness with no way to get out, but now with the awareness of domestic violence and with the new ideas coming to mind, the light shines through. ...read more.