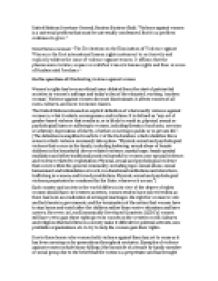 The United Nations and Eradicating Violence Against Women

﻿United Nations Secretary-General, Boutros Boutros-Ghali: ?Violence against women is a universal problem that must be universally condemned. But it is a problem continues to grow.? United Nations statement: ?The Declaration on the Elimination of Violence against Women is the first international human rights instrument to exclusively and explicitly address the issue of violence against women. It affirms that the phenomenon violates, impairs or nullifies women's human rights and their exercise of fundamental freedoms.? On the question of: Eradicating violence against women Women?s rights has been an ethical issue debated from the start of patriarchal societies to women?s suffrage and today?s idea of the educated, working, ?modern woman.? Violence against women does not discriminate, it affects women of all races, cultures, and socio-economic classes. The United Nations released an explicit definition of what exactly violence against women is, what it entails, encompasses, and inclines. It is defined as "any act of gender-based violence that results in, or is likely to result in, physical, sexual or psychological harm or suffering to women, including threats of such acts, coercion or arbitrary deprivation of liberty, whether occurring in public or in private life". (The definition is amplified in article 2 of the Declaration, which identifies three areas in which violence commonly takes place: ?Physical, sexual and psychological violence that occurs in the family, including battering; sexual abuse of female ...read more.

Female-targeted violence was not explicitly acknowledged prior to December of 1993 when the United Nations General Assembly adopted the Declaration on the Elimination of Violence against Women. Until this time, many regarded and believed that violence against women was a private/ personal matter between individuals that should be kept within that individuals boundaries and did not see it as a pervasive human rights problem that required government or State intervention. Due to the recorded increase in violence against women, the Commission on Human Rights adopted resolution 1994/45 of 4 March 1994, in which it decided to appoint the Special Rapporteur on violence against women, including its causes and consequences. This Special Rapporteur?s use is to collect, analyze, and recommend measures aimed at eliminating violence at the international, national, and regional levels. ?The mandate is threefold: To collect information on violence against women and its causes and consequences from sources such as Governments, treaty bodies, specialized agencies and intergovernmental and non-governmental organizations, and to respond effectively to such information; To recommend measures and ways and means, at the national, regional and international levels, to eliminate violence against women and its causes, and to remedy its consequences; To work closely with other special rapporteurs, special representatives, working groups and independent experts of the Commission on Human Rights.? (Women and Violence, United Nations) ...read more.

In September 1992, the United Nations Commission on the Status of Women established a special Working Group and gave it a mandate to draw up a draft declaration on violence against women. The following year, the United Nations Commission for Human Rights, in resolution 1993/46 of 3 March, condemned all forms of violence and violations of human rights directed specifically against women. The World Conference on Human Rights, held in Vienna in June 1993, laid extensive groundwork for eliminating violence against women. In the Vienna Declaration and Programme of Action, Governments declared that the United Nations system and Member States should work towards the elimination of violence against women in public and private life; of all forms of sexual harassment, exploitation and trafficking in women; of gender bias in the administration of justice; and of any conflicts arising between the rights of women and the harmful effects of certain traditional or customary practices, cultural prejudices and religious extremism. The document also declared that "violations of the human rights of women in situations of armed conflicts are violations of the fundamental principles of international human rights and humanitarian law", and that all violations of this kind -- including murder, systematic rape, sexual slavery and forced pregnancy -- "require a particularly effective response". ...read more.