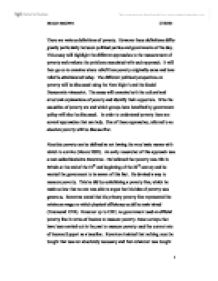 There are various definitions of poverty

There are various definitions of poverty. However these definitions differ greatly particularly between political parties and governments of the day. This essay will highlight the different approaches to the measurement of poverty and evaluate the problems associated with each approach. It will then go on to examine where relief from poverty originally came and how relief is administered today. The different political perspectives on poverty will be discussed using the New Right's and the Social Democratic viewpoint. The essay will examine both the cultural and structural explanations of poverty and identify their supporters. Who the casualties of poverty are and which groups have benefited by government policy will also be discussed. In order to understand poverty there are several approaches that can help. One of these approaches, referred to as absolute poverty will be discuss first. Absolute poverty can be defined as not having the very basic means with which to survive (Moore 2002). An early researcher of this approach was a man called Seebohm Rowntree. He believed that poverty was rife in Britain at the end of the 19th and beginning of the 20th century and he wanted the government to be aware of this fact. He devised a way to measure poverty. ...read more.

By 1834 the Poor Law Amendment made provision for only the old and the sick, all other relief was to come from the Workhouses. By early 1900's a number of important measures were introduced by the liberals, such as the first old age pensions in 1908 for the over seventies. By 1942 Sir William Beveridge had written his report and launched the beginning of the Welfare State as we know it today. During the 1950's and 60's there was a period of economic growth due to an abundance of employment and many felt that poverty seemed to be virtually non existent (Taylor et al 2002). Various explanations have been offered for the causes of poverty. Since the 1970's there has emerged the concept of an underclass, which has been used more and more to describe the poor. This underclass is said to consist of such ones as, single parent families, the unemployed, the low paid, the homeless and those who live off state benefits. The New Right explains the theory of an underclass as a way of life and an attitude which results in a dependency on the state. This type of attitude prevents them from escaping poverty and creates a culture of poverty. ...read more.

The report showed that 12.4 million people were living in households whose net income fell below the poverty line. This figure showed a reduction since 1996/97, when the figure was 14 million. The report also highlighted a fall in the number of children living in poor households from 4.3 million down to 3.6 million. However, the number of childless working age adults living below the poverty line increased, as did the numbers of people who were unemployed but wanted to do paid work and those on long term unemployment due to sickness or disability (poverty.org.uk 15/02/05). This essay has highlighted the fact that poverty is not just about lack of income. Many poor families still have the same modern material things that others have and yet they still feel excluded. Poverty can also mean the denial of choices, the inability to live a tolerable life. Townsend highlighted this when he talked about both material and social deprivation. When individuals experienced both, Townsend referred to Multiple Deprivation (Townsend et al 1988). Unfortunately despite the development of the Welfare State and numerous government initiatives the problems of poverty still exist. This essay has highlighted this fact and shown how different governments have tried to eradicate poverty with some success, since in Britain poverty continues to decline in some areas but not all. ?? ?? ?? ?? HELEN BROWN 21/02/05 1 ...read more.