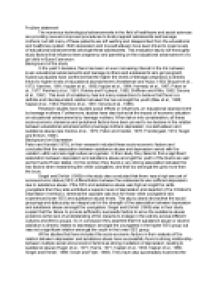 This evaluation study will thoroughly study factors that influence teen pregnancy and parenting on the educational advancement of a girl child in Buea-Cameroon.

Problem statement         The numerous technological advancements in the field of healthcare and social sciences are providing new and improved procedures to treat pregnant adolescents and teenage mothers; but still many of these patients are left wanting and disappointed from the educational and healthcare system. Both depression and low self-esteem have been linked to lower levels of educational advancements amongst these adolescents. This evaluation study will thoroughly study factors that influence teen pregnancy and parenting on the educational advancement of a girl child in Buea-Cameroon. Background of the study         In the past 3 decades, there has been an ever increasing interest in the link between lower educational advancements and teenage mothers and adolescents who get pregnant. Numerous studies have confirmed that the higher the levels of teenage pregnancy is directly linked to higher levels of educational abandonment (Aneshensel and Huba, 1983; Braucht et al., 1973; Kaminer, 1991; Kaplan et al., 1980; Kaplan et al., 1984; Kennedy et al., 1987; Paton et al., 1977; Reinherz et al., 1991; Robins and Przybeck, 1985; Shiffman and Wills, 1985; Simons et al., 1991). This level of consistency has led many researchers to believe that there is a definite and interdependent relation between the two amongst the youth (Blau et al., 1988; Kaplan et al., 1984; Reinherz et al., 1991; Simons et al., 1988).         Research studies have studied social effects or influences, on educational abandonment by teenage mothers. Furthermore, studies have also looked at the impact of economic situation on educational advancements by teenage mothers. When taken into consideration, all these socio-economic dynamics and peripheral factors have been proved to be decisive in the relation between educational advancements by teenage mothers depression, low self-esteem and substance abuse (see Dembo et al., 1979; Paton and Kandel, 1978; Prendergast, 1974; Siegel and Ehrlich, 1989).   Background on Depression Paton and Kandel (1978), in their research included these socio-economic factors and concluded that the association between substance abuse and depression varied with the variation within and amongst culture and gender. ...read more.

The impact of the physical-self on adolescent depression         There are researches that have proved that not all the females go through depression or lower cerebral or confidence growth in their adolescence. Most studies have highlighted that the boosters or aggravated causes of depression could be due to the social status, social acceptance, parental attitude, parental support and cooperation, individuals� own maturity and developed attitude towards puberty or menstruation (Cuevas Fournier, 1969).         The background of all social associations and exchanges can influence the way an adolescent deals with onset of puberty and menstruation. Here again, the education and awareness of the family plays a part, a less educated family might not be able to provide the female adolescent with enough knowledge of menstruation hence hindering the whole process of the coping strategies that the female will develop (Cuevas Fournier, 1969).         Most of the females are reported, in numerous studies, to experience the retraction of motherly love (Holmbeck and Hill, 1991), irritation and clashes within their relations with their parents (Holmbeck and Hill, 1991; Savin-Williams and Small, 1986; Steinberg, 1988) as well as a decline in the understanding and cooperation from the parents (Pappini and Sebby, 1987; Steinberg, 1988) before the reach the age of menstruation. Two of the most important causes of depression, parent-child clashes, social constraints or misdemeanors as well as overly protective and authoritative parenting (Ge et al., 1996) are believed to be the impaired parent-child communication (Slesnick and Waldron, 1997) and unpopular or strict parenting approaches (Taris and Bok, 1996).         There are some researchers who say that the timing of puberty or menstruations is the real cause of disturbance and not the phenomenon itself (Stattin and Magnusson, 1990). Tobin-Richards et al. (1983), in their study, concluded that there was a definite relation between the timing of puberty and the assessment of body image amongst many girls. Those girls who experienced puberty at an early age mostly had negative and unconstructive body-images while the opposite was true for those who experienced puberty at a later age. ...read more.