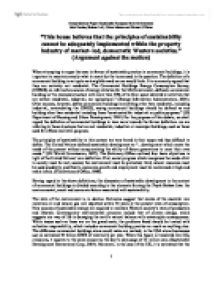 &quot;This house believes that the principles of sustainability cannot be adequately implemented within the property industry of market- led, democratic Western societies.&quot;

"This house believes that the principles of sustainability cannot be adequately implemented within the property industry of market- led, democratic Western societies." (Argument against the motion) When attempting to argue the case in favour of sustainable practice in commercial buildings, it is important to ascertain exactly what is meant by the terms used in the question. The definition of a commercial building is not quite as straightforward as one would think. It is commonly agreed that they are certainly not residential. The Commercial Buildings Energy Consumption Survey, (CBECS) an information source of energy statistics for the US Government, defined a commercial building as "an enclosed structure with more than 50% of its floor space devoted to activities that are neither residential, industrial, nor agricultural." (Energy Information Administration, 2004). Other sources, however, define commercial buildings as anything other than residential, including industrial, contradicting the CBECS, saying commercial buildings should be defined as any building other than residential including those "constructed for industrial or public purposes." (US Department of Housing and Urban Development, 2004) For the purposes of this debate, we shall regard the definition of commercial buildings to lean more towards the former definition: we are referring to those structures that are not residential, industrial or municipal buildings, such as those used for offices and retail purposes. The principles of sustainability in this context are very broad in their scope and thus difficult to define. The United Nations defined sustainable development as "...development which meets the needs of the present without compromising the ability of future generations to meet their own needs." (UN World Commission, 1987). The Stationery Office outlined four basic objectives in light of the United Nations' core definition: First, social progress which recognises the needs of all in society must be met; second, the environment must be protected; third, natural resources must be used prudently; and finally, economic growth and employment must be maintained at high and stable levels. ...read more.

Bluewater also provides a number of services aimed at families, including baby care rooms, baby changing facilities, bottle warming facilities and a private mothers' feeding room. All of the centre's dining areas have been designed for pushchair access and all contain high chairs. Pushchairs can be obtained free of charge from the concierge desk and there is a fully staffed cr�che and designated 'kids village' where children can be supervised while they play and learn (ibid). The priority of social interaction is also reflected in a range of activities that are available for both adults and children. These include fishing, golf, cycling, boating, cinemas and a discovery trail sponsored by a major clothing manufacturer. Blue water also houses a unique quiet room available to guests, hosts and employees to reflect, pray or meditate and a community room has been implemented for non-profit groups such as schools and charities to hold meetings or give presentations free of charge (ibid.). By contrast, Canary Wharf is a prestigious 35-hectare commercial and residential development in the East London Borough of Tower Hamlets. It comprises 23 office buildings with a floor area totalling 1,200 million square metres. In design terms, the development encourages social interaction by means of its three malls and leisure facilities which total 56,000 square metres. In addition the development has nine hectares of landscaped open space for its residents to enjoy ('http://www.canarywharf.com/mainFrm1.asp?strSelectedArea=Lifestyle'). The Canary Wharf Group (CWG) has established a Community Outreach Programme aimed at encouraging contact and involvement with the local community, authorities and support agencies through twenty-four social and environmental targets met between July 2003 and June 2004. These focus on both present-day and future social sustainability by aiming to promote the accessibility of Canary Wharf to the local community and to enhance education levels in the Borough. Specifically, the measures have included the formation of a football academy, local gymnastics club and hurdling squad, the appointment of a CWG local sports development officer and sponsorship of the local football league. ...read more.

All three factors carry their own importance, and contribute to the theory of sustainability in such a way that it would be redundant if one of the Triple Bottom Line was excluded. In today's Western society, a cynical but perhaps realistic view would suggest that the inclination to implement sustainable practice in commercial buildings is fairly low primarily because many believe it is not economically viable. Therefore the task in hand is perhaps to focus on the education of the economic benefit of sustainable building, as this seems to be a key inhibitor of progress in the field. There seems to be confusion and lack of clarity of peoples understanding of the economic aspect of sustainability, while the environmental and social issues enjoy widespread consensus of their benefits. Future legislation may make sustainability in commercial buildings necessary rather than optional, and perhaps such legislation is required to fulfil the benefits and requirement sustainable commercial buildings have to offer. Social, as well as Government pressure may also speed up the process of implementation. Many companies, such as those involved with Canary Wharf, under the pressure of measurements such as BREEAM, have gained considerably in terms of image from focusing on social sustainability. Again, education is a key factor here as growing awareness of commercial sustainability will force developers and occupiers to satisfy public demand. Luckily, while the implementation of commercial sustainability has been relatively low thus far, the notions of sustainability are backed internationally as shown at the Rio Earth Summit in 1992. The environmental problems are ongoing and remain a strong motivation for action, and as new technology and ideas develop, sustainable commercial building should flourish. 1 For example, a survey of many investors and their advisers has revealed that individuals feel committed to environmental improvement but look to the UK government to take a regulatory lead (Parnell and Sayce, 1999). Group Seminar Paper: Sustainable European Built Environment John Kordas, Shahan Lall, Oliver Morton and Edward O'Brien 1 ...read more.