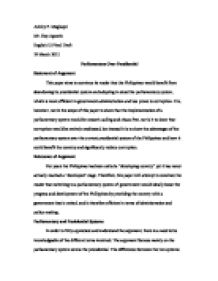 Ashley P. Maglaqui Mr. Roy Agustin English 12 Final Draft 19 March 2012 Parliamentary Over Presidential Statement of Argument This paper aims to convince its reader that the Philippines would benefit from abandoning its presidential system and adopting instead the parliamentary system, which is more efficient in government administration and less prone to corruption. It is, however, not in the scope of this paper to show that the implementation of a parliamentary system would be smooth-sailing and chaos-free, nor is it to show that corruption would be entirely eradicated, but instead it is to show the advantages of the parliamentary system over the current presidential system of the Philippines and how it could benefit the country and significantly reduce corruption. Relevance of Argument For years the Philippines has been called a "developing country" yet it has never actually reached a "developed" stage. Therefore, this paper will attempt to convince the reader that switching to a parliamentary system of government would ideally boost the progress and development of the Philippines by providing the country with a government that is united, and is therefore efficient in terms of administration and policy-making. Parliamentary and Presidential Systems In order to fully appreciate and understand the argument, there is a need to be knowledgeable of the different terms involved. The argument focuses mainly on the parliamentary system versus the presidential. The differences between the two systems are analyzed for their advantages and disadvantages throughout the paper. The term parliament generally refers to the legislature, or the law-making body of a government, more commonly known as the legislative branch of government. ...read more.

He had no clear legislative plan, and no development strategy. (A. Laquian, E. Laquian 19) Argument #3: Parliamentary ensures effective and continuous government. After elections, the Prime Minister can be expected to work efficiently during the fixed term since the executive is directly answerable to parliament. The parliament has the right to cast a "vote of no confidence," which forces the PM to resign. This way, there is a guarantee of an efficient and honest Prime Minster. Had the Philippines been a parliamentary government during the time of Estrada, it is probable that he would have been removed from office much sooner. It is the prime minister's duty to ensure that his or her government receives the vote of confidence from parliament, and is therefore motivated to be efficient, to make policies and implement them in order to stay in office, whereas in a presidential system, there is no longer any responsibility attached to the winning presidential candidate because he or she is set for a fixed term, and can only be removed by impeachment, which, regardless of how often it is clamored for in the Philippines, is actually rare. Moreover, in some parliamentary countries such like Spain and Germany, there is what they call a "constructive vote of no confidence" where parliament makes a decision on the replacement prime minister before they decide to issue a no-confidence vote. This ensures continuity in effective government administration, and it also prevents the opposition from simply grouping together and calling for a no-confidence vote, because they would have to decide on the replacement with the other members of parliament. ...read more.

(Haggard and McCubbins) In other words, because of the separation of powers, the executive and legislative branches in a presidential system are independent from each other and can "monitor" each other's activities. The absence of a separation of powers in a parliamentary system gives rise to the idea that, with the closeness of the executive and legislative branches, there would actually be a greater chance of corruption. For example, with the executive depending on the confidence votes of the legislative, it wouldn't be unusual for blackmailing to occur between the two branches. The legislative branch has certain leverage in the executive, and so it is possible for the government to be almost entirely controlled by the parliament. The solution to these problems comes in the form of a shadow cabinet. The shadow cabinet, or shadow ministry, is an ever-present cabinet composed of trained members of the opposition whose purpose is to pass judgment on the current government. So basically, the executive is being monitored by the legislative, and in case they decide to crony up or work together, the shadow cabinet is there to monitor them as well. This is actually a much better monitoring system than that of a presidential system's wherein the executive and legislative are on opposite sides. Conclusion The Philippines would benefit from a parliamentary government because it is more efficient and less prone to corruption. Should the Philippines adopt the parliamentary system and successfully implement it, corruption would be less prevalent, which would mean the country would have more to spend for government projects and so progress. Similarly, it would be easier to pass and enact bills so certain laws that would help the country further develop could be effectively implemented as soon as possible. ...read more.