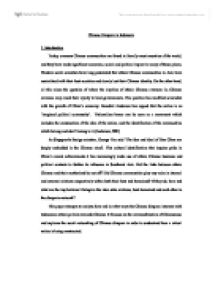 Chinese Diaspora in Indonesia 1. Introduction Today, overseas Chinese communities are found in literally most countries of the world, and they have made significant economic, social and political impact in many of these places. Western social scientists have long postulated that ethnic Chinese communities in Asia have assimilated with their host societies and slowly lost their Chinese identity. On the other hand, all this raises the question of where the loyalties of ethnic Chinese overseas lie. Chinese overseas may owed their loyalty to host governments. This position has modified somewhat with the growth of China's economy. Benedict Anderson has argued that the nation is an 'imagined political community'. Nationalism hence can be seen as a movement which includes the construction of the idea of the nation, and the identification of the communities which belong and don't belong to it.(Anderson,1983) As Singapore's foreign minister, George Yeo said 'The idea and ideal of One China are deeply embedded in the Chinese mind'. This cultural identification that inspires pride in China's recent achievements it has increasingly made use of ethnic Chinese business and political contacts to further its influence in Southeast Asia. Did the links between ethnic Chinese and their motherland be cut off? Did Chinese communities play any roles in internal and external relations respectively within both their host and homeland? If they do, how and what are the implications it brings to the inter-state relations, host-homeland and each other in the diasporic network? This paper attempts to analyse how and in what ways the Chinese diaspora interacts with Indonesian ethnic policies towards Chinese. It focuses on the commoditisation of Chineseness and explores the social networking of Chinese diaspora in order to understand how a virtual nation is being constructed. 2. Literature review 2.1 The process of migration Migration denotes any movement of human from one location to another and it is usually being divided into international and internal ones. ...read more.

On the other hand, excessive migration would be served as a push factor inevitably lead to a break down of local culture, more and more Philipino culture is spreading to Hong Kong. What evident is that the migrants do not simply disconnect the economic from the cultural, explaining why migrants don't just simply cut ties with their places of origin. This is not sentimental, but as a result of experiences they develop in the places they migrate to and how their identities interplay between economic and cultural factors which anthropology can illuminate. Therefore, notions of transnationalism are really about a lack of borders, and people put a strong investment in one place as a result of the other. 3. The Chinese Diaspora in Indonesia 3.1 The status of Chinese Diaspora in Indonesia As a result of migration, often to geographically distant lands, today's Chinese people are widely distributed outside China and live in almost every country of the world. Emmigration of Chinese Diaspora begins in 19th century when colonialism was at its height, the weakness of the late Dynasty Qing had been a main period of migration. Owning to the lack of labours in some colonies, some Chinese were employed by foreign agencies and others were forced by Qing Empire and colonial powers to move away from their countries to work as labours. From the census of Indonesia held in 2000, 2million inhabitants described themselves as ethnic Chinese but the number were expected to be underestimated and it is believed that the actual number is somewhere between 6million and 7million people of Chinese descent are now living in Indonesia. (Johnston,2005). Chinese Indonesian people are diverse in their origins, timing and circumstances of immigration to Indonesia. The dominant languages among these immigrants were Hokkien, Hakka, and Cantonese. The largest group belongs to Hakka, most of the Chinese Indonesian live in Bangka-Belitung, Java, West Kalimantan, Sumatra, South Sulawesi partially due to anti-Chinese legislation in Indonesia. ...read more.

Societies with multi-ethnic communities find it difficult to maintain the interests of the community as a whole, since the different ethnic groups all seek different goals to suit their own needs. The question of divided loyalties is bound to become increasingly pointed as the overseas Chinese invest more of their assets in their mother country. Overseas Chinese account for 80 per cent of the direct foreign investment that has flowed into China since Deng Xiaoping set out to liberalize its economy. This may cause a bias in international investment and adversely affect the economy of the host. 4. Conclusion This could be understand by the ideology of Chineseness is constantly changing. Ethnic identity is not only based upon race, blood, tradition and ancestry but also may varies from generation to generation shaped by local circumstances. In discussing the causes and development of four conflicts in Indonesia, the degree of integration of the diaspora group within the host society has important implication for potential security challenges. Among the underlying factors, political disputes and economic and social disparities outweighed the other factors and played a more significant role in triggering the initial conflicts. 5. Reference: 1.Anderson, B.(1983). Imagined Communities: Reflections on the Origin and Spread of Nationalism, London: Verso. 2.Brah, A. (1996) Cartographies of Diaspora, Routledge, London. 3.Brynen R(2003). "Diaspora Populations and Security Issues in Host" 4.Chang-Yau Hoon(2004)' How to be Chinese Ethnic Chinese experience a 'reawakening' of their Chinese identity' Inside Indonesian Apr-Jun 2004 5.Human right watch, Indonesia Alert: Economic Crisis Leads to Scapegoating of Ethnic Chinese http://hrw.org/english/docs/1998/02/11/indone8880.htm (02/11/97) 6.Johnston,T.,(2005)'Chinese diaspora: Indonesia' BBC , Jakarta (Last Updated: Thursday, 3 March 2005, 10:30 GMT) 7.Skeldon,R(1997)Migration and Development: A Global Propective. Harlow. Longman. P. 17-40 8.Wikipedia Chinese Indonesian http://en.wikipedia.org/wiki/Indonesian_Chinese last modified 07:41, 12 December 2006. 9.International Herald Tribune(2005) Michael Vatikiotis: In Asia's Chinese diaspora, are loyalties divided? http://www.iht.com/articles/2005/08/23/news/edvatik.php WEDNESDAY, AUGUST 24, 2005 10.Xiang Biao, (2003) "Emigration from China: A Sending Country Perspective" in International Migration vol. 41 no. 3 pp. 21-48. ...read more.