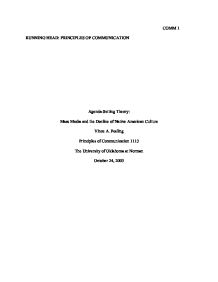 This paper will focus on the Agenda-Setting Theory (McCombs &amp; Shaw, 1972) and how this theory can relate to the decline of Native American culture through the many outlets of the mass media today.

RUNNING HEAD: PRINCIPLES OF COMMUNICATION Agenda-Setting Theory: Mass Media and the Decline of Native American Culture Vince A. Feeling Principles of Communication 1113 The University of Oklahoma at Norman October 24, 2003 Introduction This paper will focus on the Agenda-Setting Theory (McCombs & Shaw, 1972) and how this theory can relate to the decline of Native American culture through the many outlets of the mass media today. To many Americans culture is a very important aspect of their lives. Due to recent innovations and the growing knowledge of technology, knowledge of certain cultures can be ascertained and documented by the mass media more easily. Every day new fashions are created and as time goes on certain characteristics of these may be later used to identify a past culture. For many years the mass media has been very effective in the popularization and incursion of America's culture on many different countries around the globe. However, some ways and methods of many cultures in North America cannot be preserved using this fashion. The cultures of the Native America are some of these. Everyday we come in contact with the mass media in one form or another. ...read more.

McCombs and Shaw (1972) conducted the study by asking 100 undecided voters which issues they thought were important. Seeing what the public agenda was the study found very strong correlations with the public agenda and the mass media agenda. The candidates did do their usual finger pointing, but what the public thought was important was they issues they read or heard about through the different channels of the mass media (1972). The Artifact In the fall of 1988, I started elementary school. My life strongly revolved around my family, traditions, and my native language. During this time these were indeed important to me. To this day I still hold true too some of those beliefs instilled in me at a young age. Starting school was my first contact with the world in which I am familiar with today. In fact the first year of elementary school was an extreme culture shock due to the amount of diversity I was introduced to. However, I did manage to adapt and some of the new ideas and methods of living I learned during this period have become instilled in my daily life. ...read more.

The programming was educational based on the tribe's culture. Although this station didn't succeed and eventually went off the air, it was a milestone for native tribes everywhere. Since then many tribes have taken the initiative to the use the mass media to get their views expressed (1983). Many tribes have started up their own newspapers containing cultural and political information, which are circulated throughout the tribes. Many of these papers have had some success in preserving the culture of the tribes, but the more dominant mass media is continuing to take its toll. Conclusion This paper viewed the Agenda Setting theory and how the media decides what we think about. Most of the research today is accredited to the Study of Maxwell McCombs and Donald Shaw, which showed correlation between issues printed and what voters thought. This paper also took a look at how this theory can be attributed to the current decline of Native American culture of this theory by the mass media. Although some tribes have taken on the initiative to use the mass media for their benefit, cultures such as these will continue to decline until readers and listeners of the numerous channels of the mainstream mass media see them as important. ...read more.