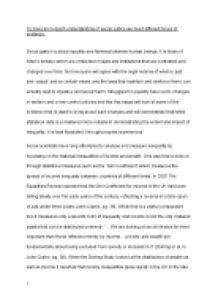 To have an in-depth understanding social justice we need different types of evidence. Discuss.

﻿To have an in-depth understanding of social justice we need different types of evidence. Social justice is about equality and fairness between human beings. It is ideas of how to behave which are embodied in laws and institutions that are contested and changed over time. Not everyone will agree with the legal notions of what is ?just? and ?unjust? and so certain views, and the laws that maintain and reinforce them, can actually lead to injustice and social harm. Struggles for equality have led to changes in welfare and crime control policies and this this essay will look at some of the evidence that is used to bring about such changes and will demonstrate that while statistical data is considered more reliable in demonstrating the extent and impact of inequality, it is best illustrated through peoples experiences. Social scientists have long attempted to analyse and measure inequality by focussing on the material inequalities of income and wealth. One way this is done is through statistical measures such as the ?Gini Coefficient? which measures the spread of income inequality between countries at different times. In 2007 The Equalities Review reported that the Gini Coefficient for income in the UK has been falling slowly over the early years of the century, reflecting a reverse in a time span of just under three years (John Clarke, pg: 36). While this is a useful comparative tool it measures only a specific form of inequality and income is not the only material assets that can be distributed unevenly. ...read more.

? views Mandela (and many other Black South African people) did not share. Social scientists suggest that a person?s sense of justice is socially created; that it is not something they are born with, but something that is learned from relationships with others and shaped by individual values and beliefs. This is how ideas of what is ?just? and ?unjust? can be seen as changeable (Newman & Yeates, pg.: 8). Often these new ideas are the result of the experience of those facing or experiencing discrimination, people who are viewed as the ?problem population?, at a high cost to them. Nelson Mandela and others were labelled as terrorists during apartheid and their fight for equality resulted in many facing criminal charges and imprisonment. Even when the ?Jim Crow? laws were abolished a large number of Black South Africans continued to carry the weight of this burden decades later as they applied for jobs and mortgages, disadvantaged by still having the criminal records resulting from these unjust laws. It took another 55 years for a Bill to be passed which gave official pardons to those convicted of disobeying racist laws (The Guardian newspaper in Newman & Yeates, pg.: 9). This provides a great example of how individuals can contest and change notions of social justice and the laws that previously supported them. Welfare states have been shaped by many social movements and interventions of different types seeking to establish greater socio-economic security, justice or equality. ...read more.

This poverty, and the poor quality of life it produced, aggravated their exclusion from social groups. Today there are certain jobs, such as caring for others, that are considered gender specific, so when Allan (Beth Widdowson, pg.: 72) became a carer for his mother he received little social recognition and few economic rewards. Lack of recognition and respect can create the conditions in which different forms of discrimination and abuse may flourish, and social harms occur. An example of this can be found in the dangers and vulnerabilities of being a ?hidden? worker where many people are unaware of their rights or are reluctant to assert them. Nick Bloomfield?s docudrama film, Ghost (Figure 3.7, Beth Widdowson, pg.: 80), offers insight into the disadvantages a particular group of workers faced at a particular time, specifically when illegal Chinese cockle pickers drowned in Morcombe Bay. Such experiences are unlikely to be reported in official statistics on occupational harm, yet they are clearly a significant source of profound suffering and harm to the individual, the wider community of interest, and society as a whole. In conclusion then while quantitative evidence is a valuable resource to help bring about change, it cannot provide the full picture. Social justice has often been highlighted and fought for primarily by those experiencing discrimination, and in order for people to understand the injustice and inequality they face qualitative evidence is vital. We?ve also seen how social welfare and crime control policies are entangled, and that qualitative evidence is useful in demonstrating the adverse effects these tensions can have on welfare policies. ...read more.