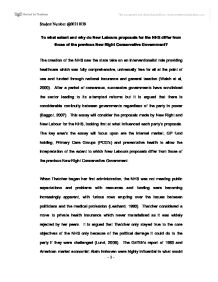 To what extent and why do New Labours proposals for the NHS differ from those of the previous New Right Conservative Government?

To what extent and why do New Labours proposals for the NHS differ from those of the previous New Right Conservative Government? The creation of the NHS saw the state take on an interventionalist role providing healthcare which was fully comprehensive, universally free for all at the point of use and funded through national insurance and general taxation (Walsh et al, 2000). After a period of consensus, successive governments have scrutinised the sector leading to its attempted reforms but it is argued that there is considerable continuity between governments regardless of the party in power (Baggot, 2007). This essay will consider the proposals made by New Right and New Labour for the NHS, looking first at what influenced each party's proposals. The key area's the essay will focus upon are the internal market, GP fund holding, Primary Care Groups (PCG's) and preventative health to allow the interpretation of the extent to which New Labours proposals differ from those of the previous New Right Conservative Government. When Thatcher began her first administration, the NHS was not meeting public expectations and problems with resources and funding were becoming increasingly apparent, with furious rows erupting over the issues between politicians and the medical profession (Leathard, 1990). Thatcher considered a move to private health insurance which never materialised as it was widely rejected by her peers. ...read more.

It is argued that although there is an acknowledgement of relationships between health inequalities, finding the solution to them has been and still is very challenging (Bochel et al, 2005). New Labour has also been highly criticized for the huge contradiction of their unwillingness to tackle the alcohol and tobacco industry (Renade, 1997). New Labour had made clear the intention to abolish the internal market before they came into office. Their major criticisms of the internal market were: competition was too fierce, best practice not shared as well as perverse incentives driving staff (Klein, 1995). It is argued by that in reality the internal market had none of the features of a retail market and that 'the NHS executive drew lines of regulation and monitoring so tightly that no real competition could emerge...it seemed that the government had built a system which was paying for the costs of competition, fragmentation and perverse incentives- yet were getting none of the benefits' (Illiffe and Munroe, 2000: 315). The proposals made by Blair and Thatcher for the NHS differ immensely in terms of ideology but it is argued that although Labour emphatically criticise Conservative policies, they still build on them to a large extent (Klein, 1998). New Labour heavily opposed the internal market, yet the purchaser provider split remained in tact. Powell (1998) ...read more.