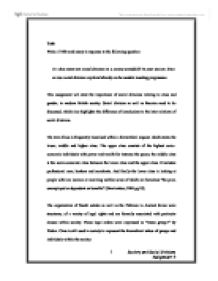 Write a 1500 word essay in response to the following question:

The term Class is frequently visualised within a hierarchical request. which states the lower, middle and higher class. The upper class consists of the highest socio-economic individuals with power and wealth for instance the queen, the middle class is the socio-economic class between the lower class and the upper class. It includes professional men, bankers and merchants. And finally the lower class is looking at people with low income or receiving welfare some of which are homeless “the poor, unemployed or dependent on benefits” (Haralambos, 2004 pg 59).

The organisation of feudal estates as well as the Plebians in Ancient Rome were structures, of a variety of legal rights and are formally associated with particular classes within society. These legal orders were expressed as “status groups” by Weber. Class is still used in society to represent the hierarchical status of groups and individuals within the society.

Classes give details of different layers of issue inequality and identify actual or even the potential social forces, which increase the capacity to alter the society. Marx, expresses class struggle as a great motive force within human history.

There have been some disadvantages among Karl Marx and Max Weber about  class exploitation. Marx understands this situation is “ambiguous”(lecture notes) and viewed  as a class conflict as the main start of social change, but Weber’s idea was that the class conflict be “contingent”(lecture notes), which obtains a high potential to take place, but by no means is it unavoidable. The founding of the debate as to the declining significance of class is therefore well established in the roots of sociological theory (Crompton, 1993).

Karl Marx theory indicates its Social class, this is made apparent when he said that there are two class models the ‘Bourgeoisie’ and the ‘proletariat’. The bourgeoisie are those who provide work for other people to work for them, whereas’ the lower class who earn their living by working for the bourgeoisies. reflected exploitation was the theory in class division. The results of this Marx theory was an increasing class, conflict and divide by the two groups the ‘bourgeoisie’ and the ‘proletariat’.

max Weber’s theory  initialises with individuals. Weber said that there is a multi class model and with the aim there are social classes,  “status” and “party groups”. Weber was aware that the capitalism leads to class division and a mixture between status party and class. The result of this theory was increasing social diversity and complex mix of personal, group and class conflicts (De-Mont, 2006).

An employment is known as the main sources of experimental evidence for arguments, relating to the declining significance of class in the late twentieth century. Britain, America and other parts of the Western Europe have observed an enormous decline with manufacturing industries due to technological innovations and shifts in the global division of labour. The rise of industry in the East followed on from the 1970’s oil crisis to sink, the Western world into collapse, thereby motivating a massive economic restructing of the society. Once the economy started to pick up, the big bang was in the service sectors in the tertiary and quaternary sectors. This resulted in a decline in the numbers of “working class”, which were replaced with the white collar workers of the “middle class”(Crompton, 1993).

The technological changes and the expansion of state provisions have led people to spend less time in paid employment. Therefore the reduced dependency on the sale of their labour to achieve the services they need. To work as employment therefore has a declining meaning as a source of social identity, due to the second half of the twentieth century.

Due to the technological changes and state requirements, the second half of the twentieth century and relative size of working class had changed considerably. Highlighting the interlink of professions and the voting behaviour. However it is somewhat difficult making a strong case to a result that the working class, or indeed any other class. Class in today’s society can be avoidable to a large extent, but there are many protests with the downfall of communism and the rise of capitalism seems that class as a division will always remain for theorists such as marx argued this point to a certain degree. If class is to be eradicated the new type of economic system has to be put in place.

In my opinion class can only be avoidable to a limited extent as class is one of the, most important, underline factors which moulds our society in to place. Marxism is one of those theories, which in today society would remains a dream.

The gender is described as “being the social aspect of the differentiation of the sexes”(British Society). Gender is seen as a social division due to its difference between men and women. A working class schemes reveals that men and women had been formed with full time employment. Over the years this phenomena has changed, which has resulted to other theories arising. For this reason it could be said that the gender division of labour is causing problems to the development of the single classification, which would include both man and women.

In the early studies the issue of social mobility demonstrates how gender was ignored. In most families men were the main breadwinners to a ratio of a few married women. Research from primarily male sociologists highlighted that the insignificance of women in theories of class. However in today’s society women have combined paid work with domestic tasks resulting in the ratio of men to women becoming more equal in the labour market, it has become impossible to create theories of stratification without considering the position of women. As most of the women now carry out part time work compared to men. Some are housewives, and within relationships couples may have jobs in different classes. Therefore in addition the women pose a number of theoretical problems for theories of stratification (Haralambos, 1995).

Due to the development of feminism, there has been a great focus upon women in many societies. Feminists have created many theories concerning gender inequality, such as: -

Both theories agree upon women being exploited, mainly due to capitalism. This shows that women achieve greater welfare with the working class and the two theories believe there is “greater scope for co-operation between men and women and working class men than do radical feminists” (Haralambos, 1995).

In Great Britain an individuals ‘class’ is determined upon the profession of the ‘head’ of the household. In previous years men were constantly believed to be the ‘head’ of the family, in which women also lived. This highlights that women did not belong in the same class group, or were not allowed to be in the class group as the ‘head’. However having women as the ‘head’ was accepted but the class was determined by the husband in the household. The Women who lived on their own gained their class due to their job.

In comparison to women, men use to get higher wages and gain different types of jobs, there are still some places that do this. As time has passed women are now able to work and combine paid work with domestic tasks. These approaches raised problems for those who wish to identify the position of women in the stratification systems of contemporary Western societies. Some approaches try to integrate women into theories of class alongside men. However, many feminist writers, in particular radical feminists, argue that women should be seen as a distinct group in their own right and that gender differences are at least important as those between different occupations.

The radical feminist, Shulamith Firestone argued that women formed a “sex class” based upon their biological differences to men. Margaret Eichler criticises this approach for being “non-or pre-sociological as it assumes a direct relationship between a biological and social difference”. Men and women form a moderately distinct biological grouping, but it may be complicated to see each as a different ‘class’. Some women are wealthy, a few have occupations of high status and which attract high rewards, there is therefore no clear economic dividing line between men and women (Haralambos, 1995).

In conclusion, the theories have not been able to reach a consensus on the gender issue. It is identified that women’s status even today is inferior to men, even though improvement have been made in the British Society. However one has to analyse whether there is an inter-relationship with work and gender. If this is answered in the basic format, then yes there is a link. Therefore it is fair to say that gender difference is still evident today with the sexist jokes, and discriminating behaviour affecting women’s placement in the hierarchy, for example a women’s promotion being restricted due to the fear she may have children, whereby affecting their earning power.

I feel that my skills in concluding the work are enhancing a lot more effectively before starting the modules as well as improving in the reading and researching through references.