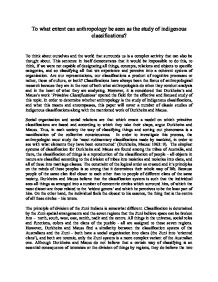 To what extent can anthropology be seen as the study of indigenous classifications?

To what extent can anthropology be seen as the study of indigenous classifications? To think about ourselves and the world that surrounds us is a complex activity that can also be thought about. This sentence in itself demonstrates that it would be impossible to do this, to think, if we were not capable of designating all things, concepts, relations and objects to specific categories, and so classifying all that we experience and perceive into a coherent system of organization. Are our representations, our classifications a product of cognitive processes or rather, those of culture, or both? Classifications have always been the focus of anthropological research because they are in the root of both what anthropologists do when they conduct analysis and in the heart of what they are analyzing. However, it is considered that Durkheim's and Mauss's work 'Primitive Classifications' opened the field for the effective and focused study of this topic. In order to determine whether anthropology is the study of indigenous classifications, and what this means and encompasses, this paper will cover a number of classic studies of indigenous classifications along with the mentioned work of Durkheim and Mauss. Social organization and social relations are that which create a model on which primitive classifications are based and according to which they take their shape, argue Durkheim and Mauss. Thus, in each society the way of classifying things and sorting out phenomena is a manifestation of the collective consciousness. ...read more.

For Douglas, the only interpretation of the Leviticus that was 'comprehensive' and so applicable to every aspect of it's symbolic system is the concept of holiness, and together with it, the concepts of the clean and unclean - 'to be holy is to be whole' (Douglas, 1996: 55) - and food taboos developed over time as a metaphor of holiness, they are unclean things that are not whole because they do not conform to the natural order, their rightful class. Certain anthropological studies have also shown that there exist not only binary classification systems dividing everything into twos, but also those which separate all things into odd numbers, such as the case of the very much talked about trio of white, red and black. Victor Turner's research on the Ndembu rituals among other things problmatized color classification within it - the tripartite classification of the above named colors, the only three for which there exist primary terms in the Ndembu language. Although it may seem that it is only the colors white and red that are opposed in rituals, they also often represent the same thing and so 'participate in one another's meaning' (Turner, 1967: 61), indicating that there is another, third factor, involved - the color black. While these colors have a wide array of meaning, Turner believes that nevertheless, they are explicitly related to physiological products of the human body, intense bodily experiences that are then associated with the powerful emotional states that follow, thus connecting culture and nature. ...read more.

By explaining how the process of naming things occurs on the basis of four principles - conjunctivity (binary opposition), criteria clustering, marking and dimension salience (Witkowski, 1978: 433), Witkowski goes on to show that these are related to human cognitive facilities for information processing, but also rely on our innate neural circuit. Although one can with much confidence show that classifications are a reflection of the social, it would be extreme to advocate the view that all classification is embedded in social institutions. Rather, it is significant to consider that there may exist some universal, innate cognitive mechanisms and abilities which are in the basis of classificatory systems. At the same time, culture, together with language, aids us in the organization of reality and all of our perceptions. Because classifications are a result of complex cognitive processes and shared social experience, they are in the midst of all that anthropology studies. Examples of research that have been given show that although the motives, interests, subject areas and perspectives differed in many ways, the question of indigenous classification is common to all of them and unavoidable. In the words of Durkheim and Mauss: 'Far from being able to say that men classify quite naturally, by a sort of necessity of their individual understandings, we must on the contrary ask what could have led them to arrange their ideas in this way, and where they could have found the plan of this remarkable disposition.' (1963: 9). ...read more.