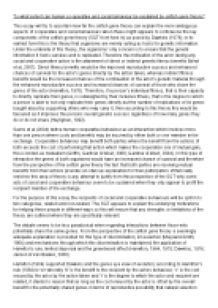 To what extent can human cooperative and social behaviour be explain by the selfish gene theory?

﻿To what extent can human co-operative and social behaviour be explained by selfish gene theory? This essay will try to ascertain how far the selfish gene theory can explain the more ambiguous aspects of cooperative and social behaviours when these might appears to contravene the key components of the selfish gene theory (SGT from here in) as posed by Dawkins (1976); in its earliest form this is the theory that organisms are merely acting as hosts for genetic information. Under the umbrella of this theory, the organisms? only concern is to ensure that the genetic information it hosts survives and is replicated. Therefore the motivation of the actor during any social and cooperative action is the attainment of direct or indirect genetic fitness benefits (West et al, 2007). Direct fitness benefits would be the improved reproductive success and enhanced chances of survival for the actor?s genes directly by the action taken, whereas indirect fitness benefits would be the increased chances of the continuation of the actor?s genetic material through the enhanced reproductive success and increased chances of survival of those who share the genes of the actor (Hamilton, 1975). Therefore, if a person?s individual fitness, that is their capacity to directly replicate their genes, is outweighed by their inclusive fitness, that is the degree to which a person is able to not only replicate their genes directly but the number of replications of its genes bought about by supporting others who may carry it, then according to this theory this would be favoured as it improves the persons overall genetic success regardless of how many genes they do or do not share (Heylighen, 1992). ...read more.

Whilst this discrimination towards helping those who share the same genes makes sense, based on this logic is it incapable of explaining why cooperative and social behaviours occur between those who do not share genes. Why would a person behave in a way that seemingly has no fitness benefits for themselves or those of possible genetic significance and furthermore what if this behaviour appears to bestow cost on the actor. An explanation for why people help others when they are not related to the recipient is ?reciprocal altruism? (Trivers 1971; Kreb & Davies, 1993; Griffin & West, 2002; Frank, 2003; West et al, 2006; Lehmann & Keller, 2006) this is where people help each other on the assumed proviso that when they need help another person will return this type of behaviour (Frank, 2003; West et al, 2006). SGT would stress that through this interaction there is a direct long term fitness benefit for the actor. However, without concrete reciprocal altruism where by favours are paid directly in proportion to the original favour in exactly equal measures, there is no certainty that the favour will ever be returned and therefore this concept may be found wanting; this will be demonstrated later when the public goods game is explained outlining the ways in which this type of behaviour decreases over time. Perhaps these social and cooperative behaviours are better understood when they are examined in their context; the impact of a behaviour on individual fitness relative to the group to which the individual belongs. ...read more.