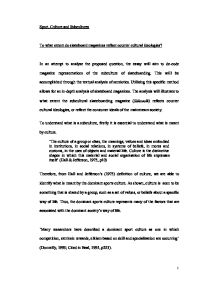 To what extent do skateboard magazines reflect counter cultural ideologies?

Sport, Culture and Subcultures To what extent do skateboard magazines reflect counter cultural ideologies? In an attempt to analyse the proposed question, the essay will aim to de-code magazine representations of the subculture of skateboarding. This will be accomplished through the textual analysis of semiotics. Utilising this specific method allows for an in-depth analysis of skateboard magazines. The analysis will illustrate to what extent the subcultural skateboarding magazine (Sidewalk) reflects counter cultural ideologies, or reflect the consumer ideals of the mainstream society. To understand what is a subculture, firstly it is essential to understand what is meant by culture. 'The culture of a group or class, the meanings, values and ideas embodied in institutions, in social relations, in systems of beliefs, in mores and customs, in the uses of objects and material life. Culture is the distinctive shapes in which this material and social organisation of life expresses itself' (Hall & Jefferson, 1975, p10) Therefore, from Hall and Jefferson's (1975) definition of culture, we are able to identify what is meant by the dominant sports culture. As shown, culture is seen to be something that is shared by a group, such as a set of values, or beliefs about a specific way of life. Thus, the dominant sports culture represents many of the factors that are associated with the dominant society's way of life. 'Many researchers have described a dominant sport culture as one in which competition, extrinsic rewards, elitism based on skill and specialization are occurring' (Donnelly, 1993; Cited in Beal, 1995, p253). One main sport within the dominant culture can be regarded as football, this reproduces many of the values associated with the capitalist dominant culture. 'In capitalist society, sports like soccer and baseball are reserved for the labouring classes. These sports have as their major goal the maintenance of a maximally productive work force' (Guttmann, 1978, p235). Therefore, values associated with dominant sports can be seen as a means of maximising the potential profit of the sport. ...read more.

'The ability of the skaters to resist and negotiate with the CSA representatives demonstrated that they successfully challenged the official agenda. The skateboarders' resistance to the CSA-sponsored competition is an overt example of the struggle between the values of corporate bureaucratic interests (e.g., control by authority, elite competition) and the grassroots interests (e.g., control by participants, open participation)' (Beal, 1995, p259). Therefore, skateboarding competitions are shown to be undertaken in a de-emphasised manner, with a heightened focus on the participation, instead of the winning. 'Skaters used the contests to meet new people, learn new tricks, and skate on new and challenging courses...There are no exclusive positions, no champions, no elite standards, no end goal to achieve, and nothing to win' (Beal, 1995, p257-258). This illustrates how subcultural sports can use aspects of the dominant class, reproducing dominant values, but through changing the signification, reflect their own countercultural ideologies. Subcultures primarily exist in opposition to the dominant culture, there is always a space offered where subcultures can challenge the power of the dominant classes. Therefore, to illustrate whether the meanings held within the magazine support the traditional subcultural values of resistance, or reproduce values reflective of the postmodernist culture, an analysis of the text will be conducted. The analysis will investigate the extent to which the supposed resistance to hegemony is actually reflected by subcultural magazines. In order to analyse the content of the subcultural magazine, the qualitative method of semiotics will be utilised. A semiotic analysis will determine whether subcultural magazines reflect the supposed resistance of skateboarders, as through semiotics text can be de-coded, illustrating hidden meanings behind the text. 'Semiotics is primarily a mode of analysis that seeks to understand how signs perform or convey meaning in context' (Manning, 1987, p25). Strinati (1995) shows that semiotics is the science of signs; it is a model of structural analysis derived from the theory of structuralism. ...read more.