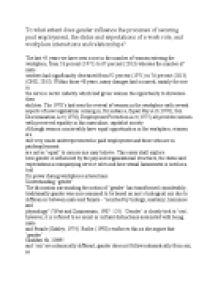 To what extent does gender influence the processes of securing paid employment, the status and expectations of a work role, and workplace interactions and relationships?

﻿To what extent does gender influence the processes of securing paid employment, the status and expectations of a work role, and workplace interactions and relationships? The last 45 years we have seen a rise in the number of women entering the workplace, from 53 percent (1971) to 67 percent (2013) whereas the number of male workers had significantly decreased from 92 percent (1971) to 76 percent (2013) (ONS, 2013). Within those 40 years, many changes had occurred, mainly the rise in the service sector industry which had given women the opportunity to showcase their abilities. The 1970?s had seen the revival of women in the workplace with several aspects of new legalisation coming in, for instance, Equal Pay Act (1970), Sex Discrimination Act (1976), Employment Protection Act (1975) all provides women with perceived equality in this masculine, capitalist society. Although women conceivably have equal opportunities in the workplace, women are still very much underrepresented in paid employment and those who are in paidemployment are not as ?equal? to men as one may believe. This essay shall explore how gender is influenced by the pay and organisational structures, the status and expectations accompanying service roles and how sexual harassment is used as a tool for power during workplaces interactions. Understanding ?gender? The discussion surrounding the notion of ?gender? has transformed considerably, traditionally gender was once assumed to be based on one?s biological sex due to differences between male and female - ?ascribed by biology, anatomy, hormones and physiology? (West and Zimmerman, 1987: 125). ?Gender? is closely tied to ?sex?, however, it is referred to as social or cultural distinctions associated with being male and female (Oakley, 1974). Butler (1990) reinforces this as she argues that ?gender? Candidate No. 229695 and ?sex? are intrinsically different, gender does not follow automatically from sex, as she contends that there are more than two forms of gender (1990:7). ...read more.

Aspects of their appearance such as height, weight, the muscle become surveilled by fellow night workers and clubs as they assess whether or not the bouncer is competent to regulate disruptive customers. If the bouncer to lacking in one of the mentioned aspects, their masculinity would be ridiculed and stigmatised (Monaghan, 2002). Hence a further male hierarchy, which excludes and includes, is constructed within men in service work. Bouncers who are deemed as tall and muscular are classed as the ?superordinate' whereas ?retail security guards? who have non-imposing bodies (less physicality) are seen as the subordinate ?muppets? (Connell, 1995; Monaghan, 2002). More recently, however, workers are pitted against both emotional and aesthetic simultaneously, from my experience working in retail at Next PLC. Retail workers are increasingly becoming overly policed and surveillance by the company with the use of ?mystery shoppers?. Mystery shoppers, sent by management, disguise themselves as ordinary customers who assess and scrutinise workers in relation to a check list. Employees are personally assessed on a never-ending checklist in which they ?must? meet, e.g. smart attire is worn, personal hygiene and appearance are satisfactory, wide product knowledge are good (Cook, 2002; Wasson, 2012). From a personal experience if workers fail to meet the criteria they face losing their month?s bonus (along with all the retail workers) and are apprehended by management who ?record card? workers (formal disciplinary). Research also suggests that not only do aesthetic and emotional labour combine, flight attendants now also have to suffer the wrath of an additional third form of labour, ?sexually-commodified labour? (Hochschild, 1983; Tyler and Abbott, 1998). Flight attendants are expected to assume the role of ?part mother, part servant, part tart? (Tyler and Abbott, 1998:440), in which they attend to the sexual desires of men. Women and flying in the air become part of a sexualised ?fantasy? for men Candidate No. 229695 (Hochschild, 1983:93-4) flight attendants unwillingly must take part in this sexualised role-play or face the paying customer complaining. ...read more.