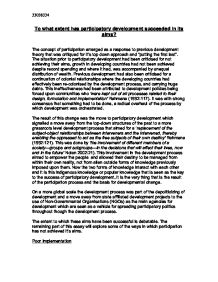 To what extent has participatory development succeeded in its aims?

The concept of participation emerged as a response to previous development theory that was critiqued for it’s top down approach and “putting the first last”.

The situation prior to participatory development had been criticised for not achieving their aims, growth in developing countries had not been achieved despite record spending and where it had, was accompanied by unequal distribution of wealth. Previous development had also been criticised for a continuation of colonial relationships where the developing countries had effectively been re-colonised by the development process, and carrying huge debts. This ineffectiveness had been attributed to development policies being forced upon communities who ‘were kept out of all processes related to their design, formulation and implementation’ Rahmena (1992:117). It was with strong consensus that something had to be done, a radical overhaul of the process by which development was orchestrated.

The result of this change was the move to participatory development which signalled a move away from the top-down structures of the past to a more grassroots level development process that aimed for a ‘replacement of the subject-object relationships between interveners and the intervened, thereby enabling the oppressed to act as the free subjects of their own destiny’ Rahmena (1992:121). This was done by ‘the involvement of different members of a society—groups and subgroups—in the decisions that will affect their lives, now and in the future’ Nolan 2002:21). This involvement in the development process aimed to empower the people  and allowed their destiny to be managed from within their own reality, not from alien outside forms of knowledge previously imposed upon them. Now the two forms of knowledge interact with each other and it is this indigenous knowledge or popular knowledge that is seen as the key to the success of participatory development, it is the very thing that is the result of the participation process and the basis for developmental change.

The extent to which these aims have been successful is debatable. The remaining part of this essay will explore some of the ways in which participation has not achieved it’s aims.

Many of the failures of participatory development are related to the poor practice of it. There are many instances (such as?) where participatory practices have met their aims but unfortunately there are also many where they haven’t. This can be attributed to a number of practices. Robert Chambers outlines some of these pitfalls. One area he outlines as a reason for the failure of participator practices is in the teaching of it. The training given is in classrooms and hotels often and rarely in the field (when training is given in the field it is much more effective) and hence, methods are taught rather than experienced/practiced. This is counter-productive in the aim to converse with communities on a level as it serves to “fossilize and stultify” (REF!), Chambers believes that more stress needs to be places on attitudes and behaviour rather than methods. These methods are another form of top-down knowledge that is imposed upon a group.

The result of this poor training often results in the exact opposite of what participatory development (again it should be noted that this is not always the case). Chambers outlines various was in which in practice i.e. in the field, many old problems are reproduced. For example the widespread practice of what he called dominating and superior behaviour which severely damages the participatory process. This dominating behaviour includes

‘lecturing, shouting down, interrupting, criticising, contradicting, preaching, pontificating and putting forward their own ideas, telling lowers what they ought to think…’ (1997:213)

This sort of dominating behaviour he claims ‘no upper[1] can be free from it’ (1997:213). If this is so then it shows that the underlying structures that plagued pre-participatory development are far too internalised in some practitioners to overcome and hence, when this happens, the subject-object relationship is not demolished and it could easily lead to imposed projects on people. To prevent this, he argues, must be done by better education and better implementation of participatory methods.

Rahmena also critiques participation for it’s use of ‘professional(s) of participation’ (2005:123). He describes them as having

‘sometimes a militant ideologue, sometimes a self-appointed authority on people’s needs and strategies to meet them, and often a ‘barefoot developer’ lacking the professional competence of the expert. Few actors are genuinely seeking to learn from the people how they defined and perceived change, and how they thought to bring it about’ (2005:124)

Like Chambers, he stresses that this is not always the case, and that some external agents acted as sympathetic and empathetic agents of change. But overall, it seems more evidence that a key flaw in the idea of participatory development lies in the people assigned to the job of doing it.

Another flaw in its implementation  which has been revealed and criticised by David Mosse for negating to take into consideration pre-existing relationships between local communities and development institutions that shape the form of this ‘local knowledge’. He describes that it is often the case that the projects are not shaped by ‘local knowledge’ but rather it is the local’s who acquire the knowledge of the institutions and manipulate the process using it, this is what Mosse describes as ‘planning knowledge’ (2002:32). This demonstrates an exact reversal of the relationship that was intended.

Does it really empower people?

Another key aim of participatory development was the empowerment of the people involved. This Rahmena claims often has the opposite effect. He critiques it for firstly assuming that the communities being developed are powerless to start off with, or having the wrong kind of power. He claims they are not powerless but their power manifests itself in different forms as networks of resistance which takes various forms (e.g. tax paers cheating the state, farmers using subsidies not for farming put personal or other needs, government paid teachers using anti-government rhetoric in the class room). This denunciation of their forms of power, serves not to empower the people but dis-value their own forms of power and replace it with ‘the most questionable notion of power’ (2005:123).

Another critique related to knowledge which is often portrayed as truth comes from Uma Kothari who challenges this truthful nature of the knowledge produced by ‘highlighting the forms of control and power articulated through participative approaches through the particular social interactions that take place’ (Kothari 2002:140). She finds that

‘the almost exclusive focus on the micro-level, on people who are considered powerless and marginal, has reproduced the simplistic notion that the sites of social power and social control are to be found solely at the macro- and central levels’ (2002:140)

thus, showing that focussing on this knowledge which is pitched in opposition to knowledge from the ‘top’ has not led to a departure from the colonialist ideology that plagued development processes in the 1950s and 1960s but a continuation of one of the main elements of it, the very thing that inspired the development of participatory development. This would suggest a theoretical flaw in participation, because it is reproducing through the dialectics of placing the upper, the North, the professional knowledge, the macro in opposition to the lower, the South, the local knowledge and the micro.

A final critique of participation is again a more gloablised critique than the localised critiques discussed previously. It is in relation to the NGOs

This essay has attempted to explore firstly the idea of participation, its aims, and the reasons for its emergence. Despite the fact its intentions were good, supported by the huge support for the concept (REF) and that it has led in some instances to what could be described as a positive change in the process. Unfortunately in many instances as well, it’s intentions were not always realised. This has been revealed in a number of ways, firstly on a localised grassroots level, where the agents implementing participatory practices cannot be trusted to do it properly, this has been seen as a result of the wrong type of training and education given to these agents, which could be improved, but also as an inherent flaw of the people employed to do it. This inherent flaw was also revealed by the reversal of the intended production of knowledge, where it ended up being the communities being developed that had to develop ‘planning knowledge’ in order to know how to deal with the developers. This could also be critiqued for altering the realities of the people being developed, which intends to allow people to achieve development on their terms and in within realities (who?).

The next critique showed how despite the intention to empower people it has been shown to serve only to condemn local forms of power but replace it with a more questionable form of power. The next criticism came from notions of indigenous or local knowledge. It showed that previous development dichotomies have manifested themselves in the participatory process which revealed another theoretical problem with participatory development as it fails to get away from the dialectic that it was created to reverse. This final point reveals, and this essay has shown that it is impossible to talk of development outside of these dialectical terms, and support for immanent critique of development, meaning a reason to abandon the development process all together. This however, may not solve the problem of top-down development, as it is the very idea that poverty etc needs to be taken care of, and the western minds thinking this that create the dichotomy.

Continuation of old problems and creation of new.

[1] ‘Upper’ is what Chambers describes as …. In opposition to ‘lowers’