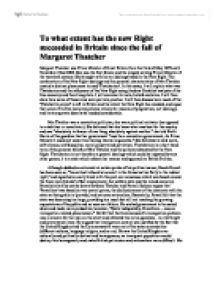 To what extent has the new Right succeeded in Britain since the fall of Margaret Thatcher Margaret Thatcher was Prime Minister of Great Britain from the third of May 1979 until November 22nd 1990. She was the first female and the longest serving Prime Minister of the twentieth century. She brought with her an ideology based in the New Right. The combination of the New Right ideology and the personal characteristics of Mrs Thatcher created a distinct phenomena termed 'Thatcherism'. In this essay, I will explain what was Thatcherism and the influences of the New Right using Andrew Gambles' analysis of the free economy and the strong state. I will examine its roots, beliefs and aims. I will then show how some of these aims were put into practice. I will then discuss how much of the 'Thatcherite project' is left in Britain and the extent the New Right has receded, and argue that some of its free economy policies remain for reasons of pragmatism, not ideology, and its strong state ideas have receded considerably. Mrs Thatcher was a conviction politician, she was a political activator (as opposed to a stabiliser or conciliator). She believed that she knew what was best for the country and was "absolutely in favour of one thing, absolutely against another." she told Keith Harris of the guardian that her government "must be a conviction government, As Prime Minister I could not waste time having internal arguments." She believed in hard work, self reliance, self discipline, moral property and patriotism. Thatcherism is a short hand term of the personal beliefs of Mrs Thatcher and the policies advocated by the New Right. ...read more.

It was also based on 'cornershop economics' where the accounts should be balanced and maximum efficiency striven for. Institutional reforms principally include the 'subversive' sections of society. Gamble argues that liberal democracies are open to subversives and militants who infiltrate institutions such as the schools, the media, the unions, the churches, local authorities and the civil service. From these points, they seek to stir up discontent and create a position where they can take over. The New Rights' aim here was to stem the subversion by attacking the institutions which it infiltrated. With the exception of the Church which was ignored, all the above institutions have undergone legislative changes which have led to changes in their finances, the way they operate, and greater responsibility for their actions. For example, the trades unions pre-1979 had an enormous amount of power which was used to good effect in the Winter of Discontent. The Conservative government brought forward five significant Employment Acts (1980, 82, 88, 89, 90) and one Trades Union Act (1984). These acts significantly weakened the unions power by increasing individual rights in a union and making them financially responsible for their actions. Reaction to these acts was initially strong but was defeated by the miners strike (March 1984 - March 1985) and the Print Union Workers dispute with News International (January 1986 - February 1987). Both these cases showed the futility of striking in the face of the new legislation. The second institutional reform example is of the Civil Service and the 'Next Steps' reforms. Seen as the biggest shake up of the Civil Service for 130 years, its aim is to become an efficient bureaucracy. ...read more.

Some free economy policies have been taken on board by both the main parties, for example the recognition of the need to control inflation, but these have been done as a matter of practical individual policies and do not necessarily fit in with any other policy to create a coherent ideology. The New Right objectives of a free economy and a strong state has left a legacy in Britain, private utilities, a reformed civil service, Quangos, CCT, curbs on inflation and so on. Those ideas and policies which do carry on tend to be broadly linked around the free economy. They do not exist out of some all encompassing ideological drive. The general public have gradually moved away from its notions, favouring a more social political agenda. Mrs Thatcher brought to the United Kingdom an agenda based on the New Right. Thatcher was a unique individual who drew her own ideas from people such as Powell but, unlike Powell, was in a position to make the changes. The two main themes of this was the free economy and the strong state and these were attempted to be placed in British politics as a hegemony. A number of policies were implemented to create the two themes, but the demise of Thatcher has seen the fall of the New Right, some of their policies still exist but it appears that is not due to ideology but pragmatism. The biggest obstacle to hegemony is public resistance which moved leftwards during the New Rights dominance of Britain. The New Right therefore has receded considerably since the demise of Thatcher, and gradually its policies are being altered by the present government. The biggest test still remains when an opposition party gains power and it has the ability to enact change. ...read more.